It used to be that Indian men working in America, whether 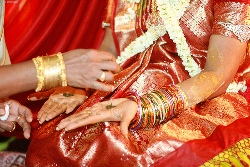 citizens, permanent residents or H-1B holders, could go to India and have their pick of a bride. They were considered good catches, the type of fish you don’t throw back in the lake. Not anymore, apparently, according to Shefali Anand of the Wall Street Journal.

Concerned about the flagging U.S. economy, parents of brides are reluctant to betroth their daughters to someone whose job may evaporate. Rahul Tamraker, 32, a consultant in Chicago, learned this firsthand during his fruitless bride search in India. Potential in-laws were worried that “consultant” was another way of saying “unemployed.” One parent wanted to see Tamraker’s income tax return, paying heed to the age-old matchmaking principle: “Good income, good outcome.” Tamraker declined and the marriage talks fizzled.

Poor guy. He’s got a hefty salary, but no bride. Which may be better, of course, than having a hefty bride, but no salary.

Then there’s Vikas Marwaha, a software enginer who’s only 27 and earning more than 80 grand a year.

During a two-week wife-hunting trip to India in December, Mr. Marwaha interviewed 20 potential brides in 10 days. He says several parents asked him, “How has the recession impacted your job?” Mr. Marwaha says he assured them he hadn’t been affected at all, but still he returned to the U.S. brideless. [Link]

Indian engineer: “I went to India for some wife-hunting last month. What did you do?”

American engineer: “I went to Indiana for some deer-hunting.”

Indian: “Really? Did you get one?”

American: “Yes, I got one and mounted it. What about you?”

Indian: “No, I didn’t come close to doing any mounting whatsoever.”

Anisha Seth, 26, has been looking for a groom for two years now. But she feels “jittery” about considering nonresident Indians as possible options. …

Ms. Seth says that if she were to move to the U.S. or to another developed country, she might not get a job quickly and would have to be dependent on her husband for a while. While she’s open to the idea of giving up her independence, she worries that given the state of the U.S. economy, a groom based in America might not be earning enough to support her. For instance, Ms. Seth says she likes nice clothes and would like to have a flat-screen TV. [Link]

American Engineer: “I heard you went to India on another wife-hunting trip. Did you get one?”

Indian Engineer: “Yes, I finally got one.”

American (smiles and winks): “So there’s been some mounting?”

Indian: “Yes, there’s been some mounting. I just mounted a flat-screen TV on the wall.”

113 thoughts on “Hefty salary, no bride”