Via the “web clips” which perch above my 5,090 unread GMail messages, news that Google’s email is now down with some brown languages:

Until now, there hasn’t been a good way to send email to friends and family in Hindi, my native language and their language of choice. That’s why I’m happy to announce a new feature for Gmail that lets you type email in Indian languages. If you’re in India, this feature is enabled by default. If not, you’ll need to turn it on in the “Language” section under Settings. Once enabled, just click the Indian languages icon and type words in the way they sound in English — Gmail will automatically convert them to their Indian language equivalent. [link] 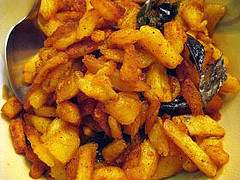 Oh, if only there were some way for me to type Malayalam words the way they sound in English to me…and have GMail (or anything else, for that matter) automatically convert them to the correct Malayalam-in-English spelling equivalent.

For example, sometimes while I’m writing, blogging, tweeting or commenting on your Facebook crap, I feel the compulsive need to refer to the side dish I loved most as a small child: a fried, potato-y concoction which I’d spell “oorelkarunga merehkwerty or in a similarly butchered fashion.

Do you know how that shiz is actually spelled?

Yeah (Thanks for the correction, sumithar!).

Unfortunately, when I’m trying to pronounce some of these words internally, so that I can sound them out slowly in order to spell them awkwardly, I hear them the way I did when I was four, which is neither helpful nor accurate. Just try and use a search engine to look for a correct spelling when Malayalam spellings are so wacky, and by wacky, I mean REALLY DIFFICULT.

For example, if you have Hindi selected, “namaste” will transliterate to “à¤¨à¤®à¤¸à¥à¤¤à¥‡.” We currently support five Indian languages – Hindi, Tamil, Telugu, Kannada, and Malayalam, and businesses and schools using Google Apps should see this in the coming weeks. [link]

My father always said it’s not lady-like to gloat, but after seeing four Dravidian languages on a list of five total, I’m gloatin’.

Blame my traumatic college days, when almost everyone was of North Indian descent, and the only brown languages I heard were Punjabi or Hindi– even from the handful of other Southie kids! All that aside, this feature sounds pretty cool to me. Like GMail wasn’t already great enough…