The popular website PostSecret featured a brown-tinged confession this week (Thanks, Niki): 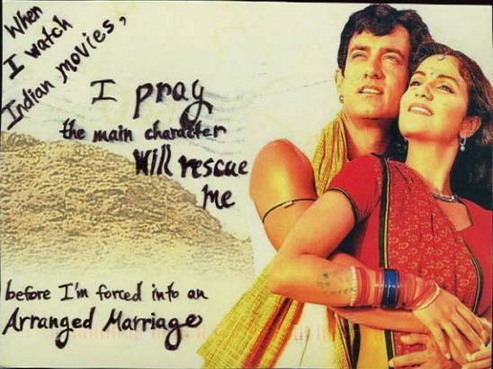 So far, three of you have sent this postcard in as a tip, which is hardly surprising; you mutineers love to discuss these secrets which have been expressed as art.

For those who are unfamiliar with the site:

PostSecret is an ongoing community mail art project, created by Frank Warren, in which people mail their secrets anonymously on one side of a homemade postcard. Select secrets are then posted on the PostSecret website, or used for PostSecret’s books or museum exhibits.

The simple concept of the project was that completely anonymous people decorate a postcard and portray a secret that they had never previously revealed. No restrictions are made on the content of the secret; only that it must be completely truthful and must never have been spoken before. Entries range from admissions of sexual misconduct and criminal activity to confessions of secret desires, embarrassing habits, hopes and dreams. [wiki]

When I first saw this, I oddly wondered if a non-Desi might have submitted it. I think my guess was inspired by the artist choosing to use the term “Indian” movies instead of “Bollywood”. Then again, maybe this secret-poster watches Tollywood, Mollywood or Kollywood fill-ums, but didn’t bother getting so specific, since they’re relatively obscure in the U.S. Part of me also thought “Bolly” because of the image used (is that Aamir Khan?). That’s all I’ve got. 😉

Meanwhile, the person peering over my shoulder hypothesized that whoever sent it in might be a second-gen American who is being pressured in to an arranged alliance. What do all of you think? Interestingly enough, in at least one instance, the person who created the postcard we wrote about was a reader who later de-lurked to debunk assumptions. I’m cool with that happening, too. Let the idle conjecture begin…