If you’re a race conspiracist, perhaps this is just the latest insult to fall upon the brothers in arms in Dubai. Going after paan is just an indirect, more politically correct way for the ruling elite to cram desi’s into an out-of-sight, out-of-mind box - 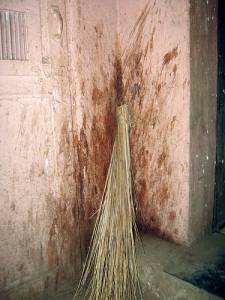 DUBAI, United Arab Emirates – Be warned: Spitting here could get you deported.

We’re not talking just any kind of spit. In this case, it’s the red-tinted juice of a popular Asian leaf that’s causing the fuss as Dubai tries to buff the image of its less-posh districts.

The crackdown — announced this week amid a broader effort to stem behavior deemed offensive — has stirred an unusual Arab-Asian culture clash in a city where the friction is often between Western ways grating against conservative Gulf sensibilities.

…”It’s like telling an Italian not to have an espresso,” said Pakistani security guard Munir Ahmed.

p>On the other hand, maybe paan spitting is just gross and Dubai’s officials really are trying to clean up the place. Though it runs against my usually libertarian sensitivities, I’m reminded of Lee Kuan Yew’s recipe for wealth in Singapore -

The difficult part was getting the people to change their habits so that they behaved more like first world citizens, not like third world citizens spitting and littering all over the place.

31 thoughts on “First they came after Paan, but I didn’t chew…”