In the most recent edition of The New Yorker, Atul Gawande has an absorbing article titled “Hellhole,” in which he reviews the effects of extreme isolation on the human mind. In particular, his article focuses on prisoners in America’s SuperMax facilities that spend upwards of 23 hours a day in solitary confinement. He also uses as examples, prisoners of war/hostages such as Terry Anderson and John McCain (who were isolated as a form of torture). American prisons purportedly use solitary confinement as a last ditch deterrent against the “worst of the worst”: that segment of the prison population which continues to commit crimes inside of the prison, gives the guards a hard time, or has successfully escaped previously. The problem is that the data shows that this approach simply doesn’t work. What’s more, it is as bad as any form of torture in that it irreversibly destroys the human brain: 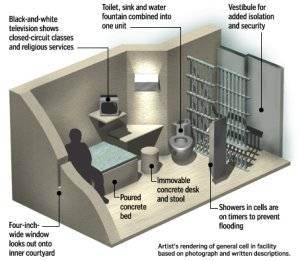 Craig Haney, a psychology professor at the University of California at Santa Cruz, received rare permission to study a hundred randomly selected inmates at California’s Pelican Bay supermax, and noted a number of phenomena. First, after months or years of complete isolation, many prisoners “begin to lose the ability to initiate behavior of any kind–to organize their own lives around activity and purpose,” he writes. “Chronic apathy, lethargy, depression, and despair often result. . . . In extreme cases, prisoners may literally stop behaving,” becoming essentially catatonic.

Second, almost ninety per cent of these prisoners had difficulties with “irrational anger,” compared with just three per cent of prisoners in the general population. Haney attributed this to the extreme restriction, the totality of control, and the extended absence of any opportunity for happiness or joy. Many prisoners in solitary become consumed with revenge fantasies.

…EEG studies going back to the nineteen-sixties have shown diffuse slowing of brain waves in prisoners after a week or more of solitary confinement. In 1992, fifty-seven prisoners of war, released after an average of six months in detention camps in the former Yugoslavia, were examined using EEG-like tests. The recordings revealed brain abnormalities months afterward; the most severe were found in prisoners who had endured either head trauma sufficient to render them unconscious or, yes, solitary confinement. Without sustained social interaction, the human brain may become as impaired as one that has incurred a traumatic injury. [Link]

p>I find that last sentence particularly important given our modern culture of incessant Twittering and Facebook updates. If you think the reaction of the brain to social deprivation is bad now, just wait until you see the next generation of prisoners who not only have their friends and family but also their Twitter circle stripped from them. The most disturbing observation that Gawande makes is that none of this is a revelation. On the scientific front, Harry Harlow and his cruel experiments proved in the 1950s what harm isolation causes in monkeys. On the legal front, the U.S. Supreme Court opined in 1890 that solitary was no way to re-habilitate a criminal mind:

A considerable number of the prisoners fell, after even a short confinement, into a semi-fatuous condition, from which it was next to impossible to arouse them, and others became violently insane; others, still, committed suicide; while those who stood the ordeal better were not generally reformed, and in most cases did not recover sufficient mental activity to be of any subsequent service to the community. [Link]

p>The reason I was so completely absorbed by this article (and I really encourage you all to read the whole insightful and moving piece) is that I am personally very interested in the romance associated with self-chosen isolation. The sports I play, the vacations I take, and the career I chose all idealize a certain aspect associated with human isolation. It isn’t just me though. When you are raised in a Hindu or Buddhist culture or simply appreciate them, the idea of the ascetic sadhu who lives alone in the forest is held up as an (impossibly) high ideal. No parent actually wants you to live up to that ideal and go off into the woods alone (they’d much rather you be a doctor) but they do want you to believe that to do so would be noble and that in some subsequent lifetime you will muster the courage for it. Here is a passage I just lifted from a website called “Hindu Wisdom:”

By suppression of the passions and detachment from all that is exterior to him, the ascetic attains superior states of unshakeable stability which eventually end in mystical communion, in a state of Samadhi, with the essence of his soul. The state of Samadhi is the culmination of Yoga and beyond it lies release. It is a suspension of all intellectual processes that lead to instability. Samadhi, then, is a “state without apprehension”. The life of the soul is not destroyed but is reduced to its “unconscious and permanent” essence. Yoga is, properly speaking, union with the self. When thus “isolated”, mind is the same as purusa when it is freed from mental impressions “like a precious stone isolated from its veinstone.” [Link]

p>Note the stark contrast. The teachings quoted immediately above suggest that detachment from all of your surroundings and a suspension of intellectual processes will lead to greater stability and release. Harlow’s experiments and others cited further above suggest that such detachment and isolation leads instead to irrational anger and a host of other permanent psychological damage. Here is a passage from Autobiography of a Yogi by Paramhansa Yogananda: 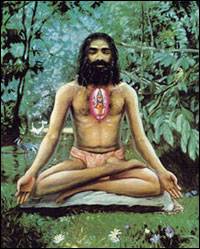 “Sir, why don’t you grant me a samadhi?”

“Dear one, I would be glad to convey the divine contact, but it is not my place to do so.” The saint looked at me with half-closed eyes. “Your master will bestow that experience shortly. Your body is not tuned just yet. As a small lamp cannot withstand excessive electrical voltage, so your nerves are unready for the cosmic current. If I gave you the infinite ecstasy right now, you would burn as if every cell were on fire.

“You are asking illumination from me,” the yogi continued musingly, “while I am wondering inconsiderable as I am, and with the little meditation I have done if I have succeeded in pleasing God, and what worth I may find in His eyes at the final reckoning.”

“Sir, have you not been singleheartedly seeking God for a long time?”

“I have not done much. Behari must have told you something of my life. For twenty years I occupied a secret grotto, meditating eighteen hours a day. Then I moved to a more inaccessible cave and remained there for twenty-five years, entering the yoga union for twenty hours daily. I did not need sleep, for I was ever with God. My body was more rested in the complete calmness of the superconsciousness than it could be by the partial peace of the ordinary subconscious state.

“The muscles relax during sleep, but the heart, lungs, and circulatory system are constantly at work; they get no rest. In superconsciousness, the internal organs remain in a state of suspended animation, electrified by the cosmic energy. By such means I have found it unnecessary to sleep for years. The time will come when you too will dispense with sleep.”

“My goodness, you have meditated for so long and yet are unsure of the Lord’s favor!” I gazed at him in astonishment. “Then what about us poor mortals?”

p>Atul Gawande uses his whole article detailing a mountain of evidence showing that extreme isolation affects the human brain in a manner similar to a traumatic head injury and leads to less control of ones thoughts and behavior. The Yogi above above uses this same “trauma” to try and attain samadhi, by its very definition “a state of complete control (samadhana) over the functions and distractions of consciousness.”

p>Whether studying a tribe of monkeys, a pride of lions, or a herd of elephants the observation is the same. Isolation from the group is a death sentence, not only because of predators, but because the animal itself begins to self-destruct:

Harlow noted, “One of six monkeys isolated for three months refused to eat after release and died five days later.” After several weeks in the company of other monkeys, most of them adjusted–but not those who had been isolated for longer periods. “Twelve months of isolation almost obliterated the animals socially,” Harlow wrote. They became permanently withdrawn, and they lived as outcasts–regularly set upon, as if inviting abuse. [Link]

So then why is it that myself and many others still find the idea of lengthy and extreme isolation from the world (like the yogi in Autobiography of a Yogi) romantic? Every bit of data tells us that there lies the path to self-destruction of the mind. Perhaps that is what the Buddha realized in the woods when he returned to choose the Middle Way.

115 thoughts on “Isolation: The Prisoner and the Yogi”