When our parents ask “Beta/i, why aren’t you settled yet?” We like to respond that it’s just much harder to find somebody in American than it was back in the desh. Well, it seems that men and women in India don’t have it so easy either.

Consider the eligible bachelors of Barwaan Kala who remain unmarried because the ladeez (and their parents) consider the village a tad too rustic: 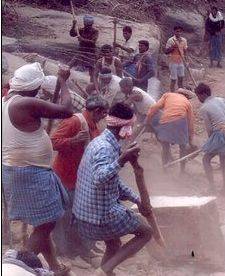 Some 121 villagers aged between 16 and 80 remain bachelors, they say, because of the remoteness of the village. The last wedding in the village was reportedly 50 years ago… the reason for the high number of bachelors is not because they lack eligibility but because there is no approach road to the village. [link]

After 100 50 years of solitude, they were given hope that the government would listen to their pleas when a politician asked for their votes and promised that he wouldn’t get married either unless he could get them a road. Unfortunately, that hope was cruelly dashed the next year:

But, after winning, the new Member of the Legislative Assembly not only got married the next year but, in the villagers’ eyes, added insult to injury by making the event a gala affair. He is now the proud father of a two-year-old daughter. When the villagers approached him to remind him of his promise to them, they say he asked them if they really believed that he too should remain a bachelor forever. [link]

p>So now the villagers have decided to take the grasp the problem firmly with their own two hands, and are laboring furiously to produce a solution. In the past six weeks half the road has gotten laid, with an equivalent amount of laying still to be done.

“Who among you,” she asked “will donate to me your sperm?”The story is pure Bolly. You have desperate villagers, a perfidious politician, and an epic effort by the men to build a bridge to romance, much like Rama building a bridge to Lanka to rescue Sita.

There’s even a Jindalesque moment in the plot where the villagers are told that they cannot build the road themselves, because they are in a protected wildlife area and they have to satisfy the red tape! (We’re currently at the cliffhanger moment right now … )

p>There’s one problem – I don’t believe it. If nobody has gotten married in 50 years, then how are there 16 year old boys in the village?

p> They do admit that a few members of the 1,500 person village have gotten married by sneaking into other villages and pretending to live there, but honestly this whole nobody has gotten married in 50 years thing is a wee bit of exaggeration, much like when your best friend claims that s/he hasn’t gotten any …. (dramatic pause) in decades.

Once they can leave their village, I’d like to introduce them to a bunch of women on the other side of India who have the opposite problem:

With all the thirtysomething women on the prowl –in chic sandals–Mumbai is starting to feel more like Sex and the City. I was at a cocktail party two weeks ago, when, after a series of vodka Diet Cokes, my friend Sameera Buxani piped up. “Who among you,” she asked in her smoke-thrashed voice and lilting accent, “will donate to me your sperm?”

It was the kind of brassy, provocative statement you might expect to hear from a single woman in New York, or Los Angeles, or London. But I was at Sameera’s family’s home in Mumbai, India, and the inquiry was met with an awkward silence. Except for me and another woman, the guests were men: an economist, a writer, and an architect. All Indian. Sameera, 37, is a Mumbai-based publicist. The silence continued, but she persisted: “Boys, did you hear my question?” [link]

And if Sameera isn’t interested in any of the fine fellows on the other side of this road, she might look to the vessels full of seamen that arrive in Bombay daily. (One if by land and two if by sea) Now that India has embraced free trade, any domestic issue can be solved by recourse to international affairs, and the solution to domestic scarcity can be found in trading a broad.