This ain’t yo daddy’s GOP no more. Not only is the Chair of the RNC a black man (Michael Steele, who owes his victory to the majority-minority terroritories of Puerto Rico, the U.S. Virgin Islands, Guam, the Northern Marianas and American Samoa) but Jindal is the new televised face of the party, set to issue its rebuttal to Obama: 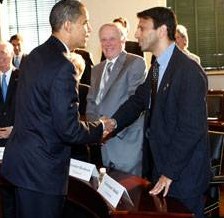 Has the GOP decided to embrace multiculturalism as a demographic necessity? Was 2008 the last year that contenders for the top RNC spot will send out CDs of such chart topping hits as “Barack the Magic Negro,” and “The Star Spanglish Banner“?

Not exactly. Nativists remain both a significant constituency within the party and a significant source of amusement for those of us outside of it, offering insights like:

“Diversity can be good in moderation — if what is being brought in is desirable. Most Americans don’t mind a little ethnic food, some Asian math whizzes, or a few Mariachi dancers — as long as these trends do not overwhelm the dominant culture.” [Link]

Despite their persistence, the nativists are unlikely to be a significant stumbling point for Jindal. Although he’s got a bit of a tan, he’s assimilationist’s wet dream, an all American guy named Bobby, whose youngest child is named “Slade Ryan” (no joke).

More importantly, he’s exactly what the rest of the party is looking for: a governor, a social and fiscal conservative, a staunch Christian, and somebody who claims to stand for increased transparency (except for his office, which is exempt). He has Palin’s virtues — he’s a young, conservative, state level politician — but he’s also articulate and bright and clean and a nice-looking guy, a storybook candidate.

Lastly, it doesn’t hurt that the party is desperate, with just five red states left, all of which are low population. At this point, they’re willing to try something new, especially if it’s old wine in a new bottle. Whether Steele and Jindal represent long term change in the party’s thinking, or just drunken college experimentation, will depend on how well they take advantage of this opportunity.

133 thoughts on “The GOP to Piyush back against Obama”