India’s religious right has been taking a public relations beating this past week. The newly formed Consortium of Pub-going, Loose and Forward Women (which, by the way, is the greatest name for a group since the Committee for the Propagation of Virtue and the Prevention of Vice) has organized the Pink Chaddis Campaign to oppose the Sri Ram Sena’s despicable actions last month and their impending Valentine’s Day protests: 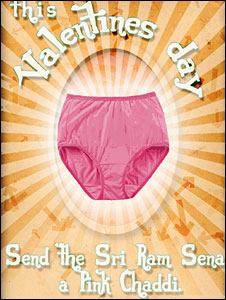 The group says it will give the pink underwear to Sri Ram Sena (Army of Lord Ram) on Valentine’s Day on Saturday.

[SRS] was blamed for the bar attack in the southern city of Mangalore last month.

Pramod Mutalik, who heads the little known Ram Sena and is now on bail after he was held following the attack, has said it is “not acceptable” for women to go to bars in India.

He has also said his men will protest against Valentine’s Day on Saturday. [Link]

p>Let’s just hope that the SRS leaders don’t have a fetish for women’s underwear or this campaign will not have its intended effect.

In other news (perhaps not entirely unrelated) the Rashtriya Swayamsevak Sangh (RSS), India’s Hindu nationalist group, has decided to start marketing a soft drink that contains cow urine. They see it as a refreshing alternative to Coke or Pepsi. I am sure they would rather young women kick back with a six pack of these instead of be loose at a bar with a beer:

Om Prakash, the head of the department, said the drink – called “gau jal”, or “cow water” – in Sanskrit was undergoing laboratory tests and would be launched “very soon, maybe by the end of this year”.

“Don’t worry, it won’t smell like urine and will be tasty too,” he told The Times from his headquarters in Hardwar, one of four holy cities on the River Ganges. “Its USP will be that it’s going to be very healthy. It won’t be like carbonated drinks and would be devoid of any toxins.”

The drink is the latest attempt by the RSS – which was founded in 1925 and now claims eight million members – to cleanse India of foreign influence and promote its ideology of Hindutva, or Hindu-ness. [Link]

I am curious, does anyone know how the cow urine aftershave splash has been doing in sales?