Pray silence and all rise for the Right Worshipful the Lord Mayor of Leicester Councillor Manjula Sood! booms the Civic Attendant. She enters the hall wearing a blue and gold sari and the symbol of her office around her neck, a heavy 18-carat gold chain set in velvet with a medallion, dated 1867, bearing the crest of the city of Leicester. Manjula Sood is the first Asian woman Lord Mayor in Britain, the rotating civic post on the Leicester City Council. The office is ceremonial, but as Leicester’s first citizen and chair of the council, the Lord Mayor is the public face of Britain’s most diverse city. By 2011 Leicester is expected to be Britain’s first minority-majority city, with black, minority, and ethnic groups (BMEs in British parlance) outnumbering whites. The East Midlands city’s population is heavily Asian (the British use the term to refer to immigrants from the subcontinent), with arrivals from North India and East Africa. Manjula Sood’s story parallels the growth of Leicester as a model for Britain’s increasingly complex relationship with its Indian, Pakistani, Bangladeshi, and Caribbean immigrants, and its new arrivals from places like Somalia and Zimbabwe. 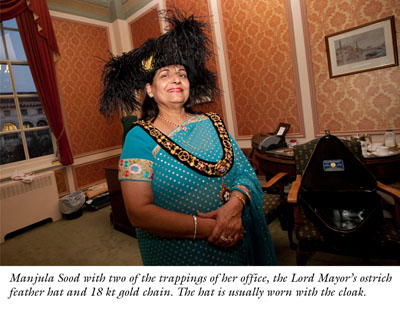 Manjula Sood was born into a wealthy family in Ludhiana, in the Indian state of Punjab. Her father was a doctor, her mother a teacher, and the family placed a high value on education, especially for women. After earning a master’s degree in sociology at Punjab University, she became a senior researcher in a program sponsored by Johns Hopkins University that worked on women’s and children’s health issues in rural Punjab.

â€œMy spirituality developed at a lot,â€ she says of her time working in the villages. â€œI had so much at home; these people had nothing to eat.â€

She came to Leicester in 1970, joining her husband, Vijay Paul Sood, who had arrived six years earlier to pursue an engineering degree and had begun working for General Electric. She came on a snowy December day at a time when Britain’s tolerance for immigrants was under strain. Leicester’s Asian population had been increasing by over fifty percent annually for a decade, with many arrivals from Uganda, Kenya, and Tanzania. The whites-only National Front party was agitating against immigration, stoking nationalist and racist fervor. This was the era of Enoch Powell’s famous “rivers of blood” speech, in which the Conservative MP railed against the influx of immigrants, blaming them for the breakdown of Britain’s social and physical infrastructure.

Two years after Sood arrived, during the crisis sparked by Idi Amin’s expulsion of Asians from Uganda, the Leicester City Council (over which Sood now presides), placed advertisements in the Uganda Argus, the state-run newspaper, claiming that Leicester’s housing and schools were overloaded: â€œIn your own interests and those of your family you should not come to Leicester.â€ In December of 1970, Sood’s house was cold since she and her husband could barely afford to heat it. Paul worked long hours. After a week, when the snow stopped, she asked him, â€œHow do you make a phone call here?â€ She went out to a shop with a pay phone, called Ludhiana, and asked to come home. Her grandfather said she was in Britain now and Leicester was her home. â€œYou have an education,â€ he told her. â€œNow use it.â€

So she enrolled at Leicester University, pursuing postgraduate studies in teacher training. During her first year, she found out she was pregnant. She gave birth to her first son, taking only minimal time off from her studies. â€œComing from a wealthy family in India and now having to face all these challenges was difficult,” she says. “We didn’t have any money. But you make the best of it.â€

After completing the program, she started teaching at a primary school in Leicester, far from her home, which required her to take a bus to the city center and then change to another line. During the winter, she would wait in the foyer of Leicester Town Hall.

â€œOn the day I became Lord Mayor, I thought of those times. Back then I was a woman seeking shelter from the cold. I had no money for warm clothes. I never thought I would own this building!â€ she says. â€œThis is how destiny works.â€

As one of Leicester’s first Asian primary school teachers, she developed a multicultural curriculum, teaching the students about Christmas, Eid, Hanukkah, Diwali, and other religious festivals, but was reproached by her principal. Sood marks this as a turning point for her: â€œ’When in Rome, do as the Romans,’ he told me, and I was boiling inside. When I told this to my husband, he said, ‘You have to get into politics.’â€ 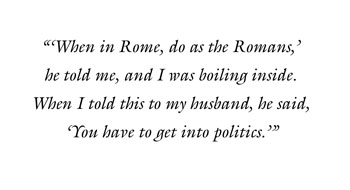 It would be a while before Sood entered elected politics, though Paul became a Leicester City Councillor in 1982. The couple had become successful and established in Leicester, starting an insurance company and travel agency. When Paul died suddenly in 1996, she was asked to stand for election to fill out the remainder of his term. When the term ended, she had hoped to step down, but the Council urged to run on her own. “They wouldn’t accept my resignation,” she says.

But these were difficult times for her. As a widow, she felt isolated and alone, she says, pointing to the marks on her arm where she burned herself with incense sticks. Politics was a difficult environment for her, requiring her to confront racism. â€œIt’s not all love-care-share like it was in primary school,â€ she says. Wanting to withdraw completely, one day she found solace in the silence of a Catholic Church. Before an image of the Virgin Mary, she heard the words, “Why are you defeating the woman in you?”

Now having served three terms on the Leicester City Council, Sood is a mainstay of Leicester politics. With her elevation to Lord Mayor, which is a one-year post conferred on the longest serving city councillor, she has become a popular national and international figure. In her career as a city councillor, she has championed education, mental health, and women’s issues. She is a director of the Leicester Council of Faiths, an advisory group to the city council, and has won a raft of awards from national and international women’s groups and Britain’s Labour Party. She has named the Special Olympics as the Lord’s Chosen Appeal, the designated charity during her term. Leicester will host Britain’s games in 2009.

As an immigrant Punjabi Hindu, finding inspiration in Christianity, and pioneering a multicultural school curriculum, Manjula Sood is the contemporary face of an office that dates back 800 years — Leicester has had a mayor since 1209 (and a Lord Mayor since 1928). She is fifth Asian so honored in Leicester and the first Asian woman Lord Mayor anywhere in Britain (women are called Lord Mayors, as holders of the office).

Sood is part of an early generation of Asian immigrants to Leicester who arrived with an education, skills, a work ethic, and a willingness to participate in government. The Indian and East African immigrants from the 1960s and early 70s had been financially secure in their former homes and were now eager to raise their living standards in their new one. Integration and not isolation has become part of Leicester’s identity.

But Leicester and the rest of Britain are facing significant challenges in the post 9/11 world. The Iraq War and the Israeli-Palestinian conflict exacerbate tensions between Muslims and other groups. Muslims in Leicester have been victims of racist attacks. There are new questions about the ability of Britain to absorb and integrate its new arrivals, including Somali refugees, who are attracted to historically Asian centers like Leicester and Southall, a London suburb, because of the number of mosques.

Emigrating from Zimbabwe to Britain in 1976, Suleman Nagdi — a member of the Leicester Council of Faiths, the Federation of Muslim Organizations, and recipient of an MBE — says, “Democracy has given us an opportunity to flourish. We are confident we will make a contribution locally, nationally, and internationally. We are British, not a collection of smaller communities.”

Manjula Sood sees the way forward through good governance, community involvement, and a sense of compassion. Despite her personal trials and the challenges that lay ahead for Leicester, she says, “I never want to give up.” 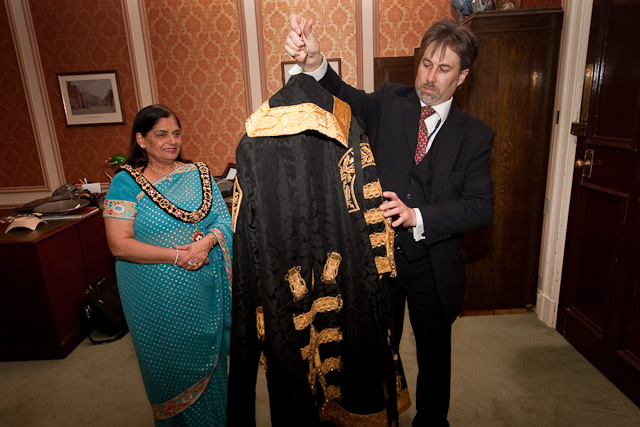 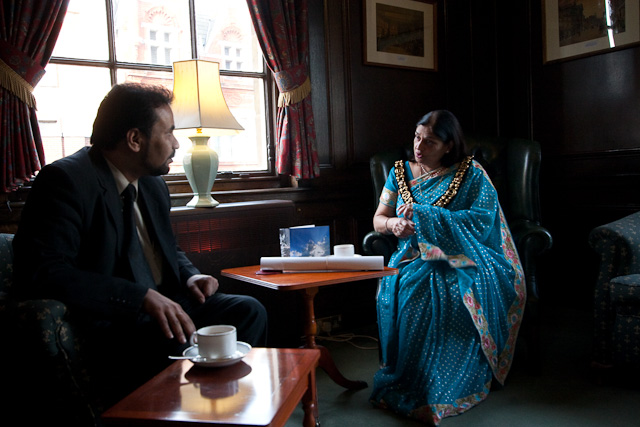 Manjula Sood greets Abu Taher, president of the Bangladesh Development Trust, who will present her with a donation to the Special Olympics 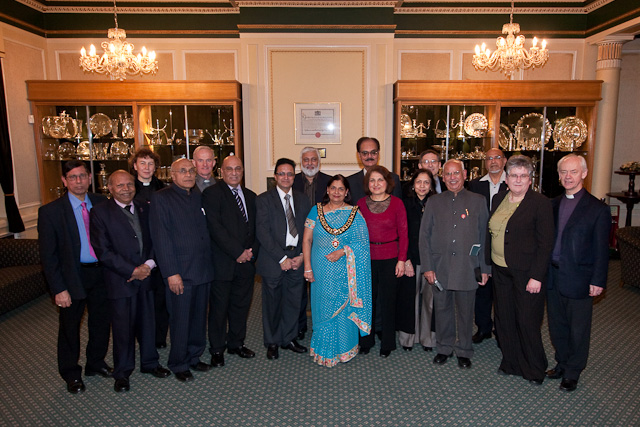 Members of the Leicester Council of Faiths 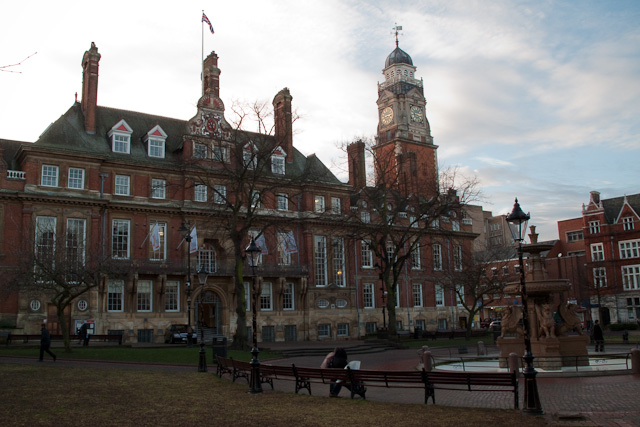 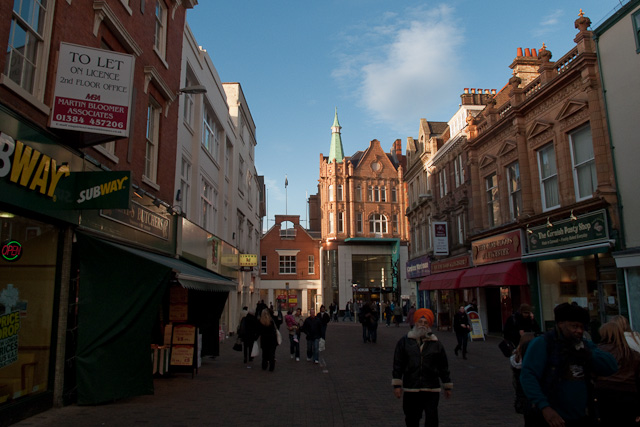 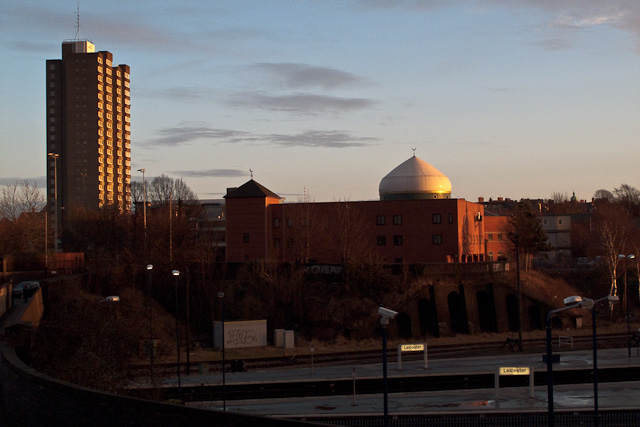 Leicester’s Central Mosque, one 36 mosques in the city

74 thoughts on “The Lord Mayor of Leicester”