The ongoing search for all photos and documents from President 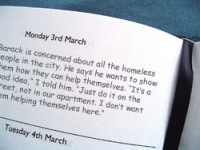 Obamaâ€™s past has turned up a diary that his desi roommate kept in the early 1980s. Some of the entries are quite revealing:

Aug. 28, 1981: Barack and I went searching for furniture today. We found a couch that someone had dumped on the street. It doesnâ€™t look too bad, once we turned the cushions over. It doesnâ€™t smell bad either, once Barack sprayed it with his Brut.

Sept. 14, 1981: Barack and I have been eating pizza, macaroni and cheese, and Ramen noodles for dinner. But today, I decided to make chicken karahi for a change. Barack tasted it and said, â€œMmmm â€¦ This is a good change. Did I tell you how much I believe in change?â€

Oct. 2, 1981: I tried to get Barack to give up cigarettes today. I said to him, â€œWhy smoke cigarettes when you can smoke pot?â€ But it didnâ€™t work. Poor guy. He really needs some help.

Nov. 13, 1981: Barack is a little too square. Iâ€™m trying to get him to be more stylish, more cool. Yesterday, I took him to see Sholay at a friendâ€™s house, hoping that Amitabh Bachchanâ€™s style would rub off on him. And today, Barack is walking around wearing a wide-collared shirt and saying, â€œTera naam kya hai, Basanti?â€

Nov. 20, 1981: Barack is such a dreamer. He talks about being leader of America one day. I told him that he needs to shoot for something more realistic, such as leader of the church choir. I mean, the day a black man becomes leader of America is the day I need to give up weed.Dec. 11, 1981: I spent the entire morning teaching Barack how to pronounce Pakistan. He kept saying â€œPack-he-stan.â€ He finally got it right though. In a few days, weâ€™ll try it again and this time without the rubber band on his tongue.

Jan. 14, 1981: I wish I was as smart as Barack. His brain is like a sponge. Mine is like a stone. When we go to nightclubs, he doesnâ€™t have to write any phone numbers down. Neither do I, but thatâ€™s another story.

March 3, 1982: Barack is concerned about all the homeless people in the city. He says he wants to show them how they can help themselves. â€œItâ€™s a good idea,â€ I told him. â€œJust do it on the street, not in our apartment. I donâ€™t want them helping themselves here.â€

April 22, 1982: Barack and I are really into the party scene. Iâ€™m always ready to go to a party and heâ€™s always recruiting for one.

May 8, 1982: Barack dragged me along to the basketball court this evening. Some other guys were there too. Barack and another guy picked teams. I was the worst player there, but Barack picked me first. On the way home, he said, â€œWinning isnâ€™t everything. Besides, none of those other guys knows how to make chicken karahi.â€