I can’t contain myself, I HAVE to live-blog the Golden Globes. That statement itself might be a spoiler, I know. If you’re on PST, have this isht on DVR or otherwise loathe learning something before you’re supposed to, don’t go past the jump.

[And if you are a Wesssssider, then come on. You're used to this, so no need to complain...I'm from there, I remember the feeling, but there's nothing to be done. Except move here. Which is what I did.

If you’re on the right coast and feel like gettin’ your Mutiny on…party over here!Simon Beaufoy just accepted a Golden Globe award for “Best Screenplay”, for Slumdog Millionaire.

My hasty attempt to transcribe his remarks:

“Thank you very much, Hollywood Foreign Press Association. It’s an absolute honor. We really weren’t expecting to be here in America at all at one time, so it’s just amazing to be standing here. It started with Vikas Swarup who wrote the novel “Q+A” that amazing book about Mumbai, it went to Tessa Ross (?) the cleverest film woman in Britain, who gave it to me, who sent it to a man called Christian Colson, who produced the film and it went through many many other peoples hands, too many to say thank you to, but to all of them, thank you. And finally it got to Danny, there are some people…there are some directors who shoot a screenwriter’s script and there are once-in-a-blue-moon a director who comes along to make it fly and I don’t need to tell you that he made it fly. Thank you Danny, Thank you to Jane, my wife and my children.”

Felicitations to Freida Pinto, who is beautiful– and elated. Sweetly dorky Dev Patel looks dashing in a cutaway collar and I want to kiss him for it– that table is always sadly ignored at my local Thomas Pink. Then again he’s from England, so they’re not terrified of them over there.

Aside: am I hallucinating or are non-brownz wearing desi clothes? I rushed home but missed the first hour, so I did not get to see the red carpet, and thus, no full-length views to confirm. Haven’t seen Freida’s entire dress, either.

Annnnd…A.R. Rahman, who is up for “Best Score”, gets his name mangled by Kate Beckinsale/Puffy. A.R. Roomin’? Like, I’m roomin’ with a total slob? Awesome.

I shall overlook such stupidity, however, because I get to transcribe an ACCEPTANCE SPEECH!

“Unbelievable. Uh, I’ve got this long list I thought I won’t win so anyways thanks to the almighty God for bringing me here, Danny Boyle, Kristin from Cellar Door (?), Fox pictures, all my musicians in Chennai, Mumbai, Samuel Long, Karan Grover, M.I.A. for the collaboration Sam Schwartz (?), Allison and the billion people from India. Thanks for all your prayers.”

I’ve never seen him live, so this is mad exciting for me. His happiness and nervous energy are cute. I like his tux, but a mutineer who is here says the tie reminds him of an undertaker’s. That same mutineer is another ABD of Tamizzhrl extraction, who is now mocking me for my inability to understand some of what A.R. ROOMIN’ was saying.

He actually had to translate for me, especially after he heard me mutter, “Karen WHO?” when Karan Grover was what had been uttered. I didn’t even understand M.I.A. the first time I heard it (Em, em, eye, eye, ay, ay…MIA. zomg. Me. Her stalker. I should give back my CDs.)

I am shame spiraling accordingly. Said spiral commenced after hearing, “look at who thinks she’s a gully South Indian, who can’t understand what my Tamil compatriot is saying…”. Oy. Pwned.

Uh, David Duchovny, thanks but no thanks for your INACCURATE clarification?!

“Um, a slight correction, the gentleman who just won the last award his name is A.R. ROOMIN’, I’m told, so…thank you.”

Mutineer apsara77 points us to the High Heel Confidential blog, which is currently featuring this picture: 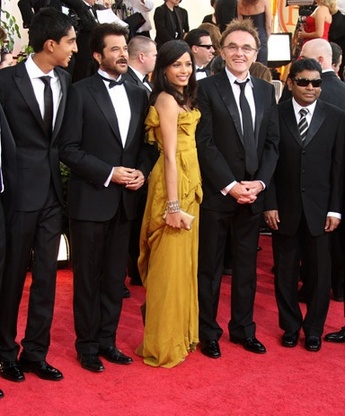 Hrm. Freida’s dress looks okay from that angle, but I’m not a fan of its view straight-on. Decking those hips with boughs of…chartreuce silk? Why?

I’ll try and transcribe his thank-you speech soon, but my helpful, remote-control-pausin’-friend ran off to get Five Guys and I can’t do it on my own. No woman is an island. Especially when she’s craving a grilled-cheese with peppers and tomatoes. Live-blogging makes me hungry!

“Listen, thanks ever so much, Golden Globes or the GGs as we very affectionately refer to them. Your mad, pulsating affection for our film is much-appreciated. Really deeply appreciate it. Um, I have to thank Tessa Ross, who has been thanked before and there’s a reason for that, she’s an extraordinary person. I have to thank uh, Peter Rice, from Fox Searchlight, without whom I wouldn’t be here, standing here, absolutely, I have to thank Cellar Door, I have to thank Pathay (?), um there’s so many people to thank, which I know everybody goes on about. I’ve got to thank my agent, Robert Newman, again, without whom I wouldn’t be here. Um, making a film is a family affair obviously, and the people in Mumbai, who are all watching by the way, big shout of love to them and particularly Loveleen Tandon…?…?…and our three musketeers, Tabrez, Pervesh and Sanjay (?) and finally, and most appropriately in this house, to the actors, particularly Anil, Dev and Freida and Madhur (?) and the six, the six young actors who played the other parts in the movie, who were fantastic. Um, I just want to finish by thanking my kids, Grace, Gabriel and Galen and Gail who is their mom and anyway thanks ever so much. Bye-bye.”

I have had to sit here (while starving) smelling fresh, hot cajun fries while typing all that. Never question the sacrifices bloggers make for you. Never.

Lesson learned. Never leave a Five Guys grilled cheese to sweat in foil while typing furiously. I was so sad about my mushy sandwich, until I looked up at the screen. Wait. Could it be? Was such a thing even possible?

Was Shah Rukh Khan wearing a sequined tie under his shirt?

Maybe wearing it under his shirt is better than over, come to think of it.

Wot’s this? An even BETTER distraction from my soggy sandwich?

A standing ovation for the other SM, Slumdog Millionaire.

“Come on guys, get up here…Dev. Uh wow, thanks so much to the Hollywood Foreign Press Association, that’s quite hard to say after a few martinis. It’s an enormous honor for me to be collecting this on behalf of everyone involved in making this film. Um, I’d like to say a few very big thank yous to a few very big cheeses, first of all, Peter Rice of Fox Searchlight, Jeff Robinoff at Warner Brothers…uh…Paul Smith at Cellar Door films, Tessa Ross at Film Four…uh…???…we couldn’t have had a smarter or more supportive bunch of partners watching over us as we made this film so thanks to all of them. Um, we had the great privilege of working for a fantastic cast and crew in Mumbai who will be going nuts as they watch this tonight, they will be going absolutely mental, so Hello to all of them and we’ll see you next week when we come out for the opening of the film in India next Thursday…uh…and that’s going to be some party, I think. Um, our fantastic cast, Dev Patel, Freida Pinto, Madhur Mittal and everyone else, all our young cast, Anil and Irfan, Simon Beaufoy who gave us all an incredible opportunity by writing an extraordinary screenplay and the great Danny Boyle, who brought it so miraculously to life. My mum, my dad, my girlfriend for only dumping me once. Thank you very much. Good night.”

Again, I may not have caught every word of the speech, but that should be most of it. FOUR! They won FOUR! Who’s ready to party in the bunker?

I love how wiki is already updated with the news. Here’s the list of trophies won:

I think it’s safe to update the title at this point. So I did.