One of the most famous Konkani pop songs from the 1960s is Lorna’s “Bebdo”. Here it is, with lyrics and translation:

Pretty swinging, huh? The sassy tone and subject matter reminds me a little of Trinidadian Calypso from around the same period. It’s true that there is a dark side to these types of songs (alcoholism, and the hint of domestic violence), but there is also a buoyancy and power in her voice that I really appreciate; it sounds like she won’t let anything get her down. (Are there other 60s Goan/Konkani tracks available on sites like YouTube that readers would recommend?)

When this was first recorded in 1966, the effect on the local music scene was electrifying:

From a kiosk on the beach, a pretty lady named Bertinha played records on the speaker system provided by the Panjim Municipality. She had a weakness for Cliff Richard tunes, Remo says. But that evening, she spun out a song called Bebdo (Drunkard). Miramar Beach was hypnotised. “The Panjim citizenry stopped in its tracks, the sunken sun popped up for another peep, the waves froze in mid-air,” Remo has written. “What manner of music was this, as hep as hep can be, hitting you with the kick of a mule on steroids? What manner of voice was this, pouncing at you with the feline power of a jungle lioness? And hold it no, it couldn’t be yes, it was no was it really? Was this amazing song in Konkani?”

Bebdo had been recorded a few months earlier by Chris Perry and Lorna in a Bombay studio and released by HMV. The jacket bore the flirty image that would later hang outside the Venice nightclub. The 45 rpm record had four tracks, opening with the rock-and-rolling Bebdo and ending on the flip side with the dreamy ballad, Sopon. “Sophisticated, westernised urban Goa underwent a slow-motion surge of inexplicable emotions: the disbelief, the wonder, the appreciation, and then finally a rising, soaring and bubbling feeling of pride,” Remo says. “The pride of being Goan. The pride of having a son of the soil produce such music. Of having a daughter of the soil sing it thus. And, most of all, of hearing the language of the soil take its rightful place in popular music after a period of drought. Chris and Lorna had come to stay.” (link)

The article from which that story is taken is by Naresh Fernandes, and he goes on to give a really interesting (if digressive) account of the links between Goa and the mainstream Hindi film music world.

First, even from what little I’ve heard, it’s pretty evident that Goan pop music (which is deeply influenced by big band, bebop, and 1960s R&B) overlaps strongly with the “modern,” R.D. Burman sound that emerged in Bollywood in the late 1960s and 70s (think “Ina Mina Dika”). The reason for that is simple: the majority of the musicians employed by the film studios were Goans: 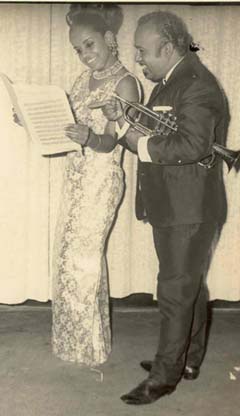 But the Sound of India actually was created by Goan musicians, men whose names flickered by in small type under the designation “arranger”. It’s clear. The Hindi film classics that resound across the subcontinent and in Indian homes around the world wouldn’t have been made without Goans. Their dominance of the Hindi film world is partly a function of the structural differences between Indian and Western music. Indian classical music is melodic. The ragas that form the basis of Indian music are unilinear, each instrument or vocalist exploring an independent line. To move an audience, film scores must be performed by orchestras, with massed instruments playing in harmony. Only Goans, with their training in Western music, knew how to produce what was required.

Frank Fernand was among the first Goans in Bollywood and assisted such worthies as Anil Biswas, Hemant Kumar and Kishore Kumar. As he describes it, the men who composed the scores for Hindi films couldn’t write music and had no idea of the potential of the orchestras they employed. They would come to the studio and sing a melody to their Goan amanuensis, or pick out the line on a harmonium. The Goan assistant would write it out on sheet paper, then add parts for the banks of strings, the horn sections, the piano and the percussion. But the assistant wasn’t merely taking dictation: It was his job to craft the introductions and bridges between verse and chorus.

Drawing from their bicultural heritage and their experience in the jazz bands, the Goans gave Bollywood music its promiscuous charm, slipping in slivers of Dixieland stomp, Portuguese fados, Ellingtonesque doodles, cha cha cha, Mozart and Bach themes. Then they would rehearse the orchestras, which were staffed almost entirely by Goans. After all, hardly anyone else knew how to play these Western instruments. To Frank Fernand, the music directors were mere subcontractors, men whose main job was liaising with the financiers. “We arrangers did all the real work. They’d show off to the directors and producers and try to show that they were indispensable. But to be a music director, salesmanship was more important than musicianship.” (link)

I don’t have independent confirmation of Fernandes’ account of the influence of Goan orchestral arrangers and musicians on the emergence of the “modern” (as opposed to Raga-based) Bollywood sound. But his account certainly seems quite plausible. (One way to check would be to look for the small print names in the credits on old Hindi films from the period to see if there are Goan/Portuguese names.)

I would also recommend another article in this series by Naresh Fernandes, here. Among other things, he talks about the influence of expatriate African-American jazz musicians in Goa (adding a further wrinkle to this rich story of musical hybridity).