Over at the addictive blog PostSecret, a desi-angled postcard for your procrastination pleasure on a Monday morning [tipster hat tip to Chick Pea]. 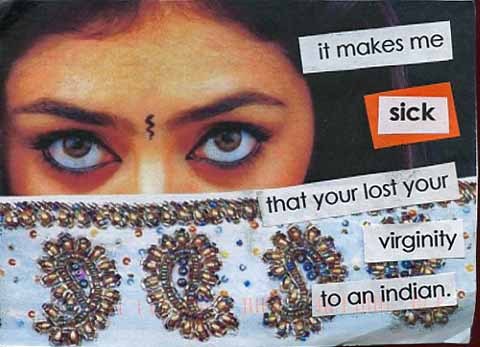 b) Was the comment filled with xenophobic hate by a non-Indian to an Indian? Or was it a jilted Indian lover that was upset that the other Indian chose another Indian to lose his/her virginity to?

A concerned reader over at PostSecret e-mailed the following to the site, the comment left underneath this postcard.

I am an Indian American and honestly, I think people should feel honored to have sex with Indians. I mean, we DID write the Kama Sutra.

Amen to that. What do you think is the story, morning glories?

93 thoughts on “Touched For The Very First Time”