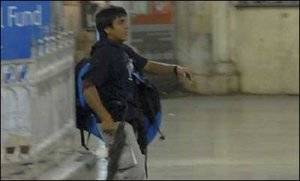 Pakistan’s DAWN newspaper features a great investigative piece that details how its reporters tracked down (whereas other major papers failed) the family of Mohammed Ajmal “Babyface” Kasab (who may really be Mohammad Ajmal Amir) and listened to what they had to say. Kasab was, of course, the lone surviving gunman from the recent Mumbai attacks.

Ajmal Kasab…was supposed to belong to the village Faridkot in the Punjab. Media organisations such as the BBC and now the British newspaper Observer have done reports trying to ascertain the veracity of claims appearing in the media that the young man had a home there.

At the weekend, the Observer in England claimed that it had managed to locate the house everyone was looking for so desperately. Its correspondent said he had got hold of the voters’ roll which had the names of Amir Kasab and his wife, identified as Noor, as well as the numbers on the identity cards the couple carried…

However, the man who said he was Amir Kasab confirmed to Dawn that the young man whose face had been beamed over the media was his son.

For the next few minutes, the fifty-something man of medium build agonized over the reality that took time sinking in, amid sobs complaining about the raw deal the fate had given him and his family. [Dawn]

I have commented before on SM about how much I disagree with using the term “evil” to describe men like Ajmal Kasab. To call them “evil” or “insane” (without clinical proof of insanity) in my opinion gives society an undeserved excuse. It allows us to isolate them as others, as subhumans. It allows us to feel superior in thinking that we were born good whereas these men were born bad. Their “affliction” is seen as having zero probability of transmission to good people like us. It just cannot spread. You are born evil. Then you go and talk to their parents and you realize the difference between how we were nurtured and how they were nurtured can’t really be pinpointed except for a few wrong turns and bad decisions that cascade into fanatic acts. The father continued:

‘I was in denial for the first couple of days, saying to myself it could not have been my son,’ he told Dawn in the courtyard of his house in Faridkot, a village of about 2,500 people just a few kilometres from Deepalpur on the way to Kasur. ‘Now I have accepted it. This is the truth. I have seen the picture in the newspaper. This is my son Ajmal…’

After his brush with crime and criminals in Lahore, he is said to have run into and joined a religious group during a visit to Rawalpindi.

p>’He had asked me for new clothes on Eid that I couldn’t provide him. He got angry and left.’ [Dawn]

p>I just finished watching Slumdog Millionaire. I know, I know. It is just a fictionalized drama. A few plot elements are very plausible though, especially the development of Salim as the movie progresses. Characters in the movies City of God and Syriana also follow similar trajectories. Bad choices and the bitterness of broken dreams lead to sociopathic tendencies.

While Amir was talking, Ajmal’s two ‘sisters and a younger brother’ were lurking about. To Amir’s right, on a nearby charpoy, sat their mother, wrapped in a chador and in a world of her own. Her trance was broken as the small picture of Ajmal lying in a Mumbai hospital was shown around. They appeared to have identified their son. The mother shrunk back in her chador but the father said he had no problem in talking about the subject. [Dawn]

p>His own mother is often a terrorist’s last victim. It doesn’t matter that she and her husband may have tried to do right by their kids:

He modestly pointed to a hand-cart in one corner of the courtyard. ‘This is all I have. I shifted back to the village after doing the same job in Lahore. My eldest son, Afzal, is also back after a stint in Lahore. He is out working in the fields.’

It is not and Amir Kasab repeats how little role he has had in the scheme since the day his son walked out on him. He calls the people who snatched Ajmal from him his enemies but has no clue who these enemies are. Asked why he didn’t look for his son all this while, he counters: ‘What could I do with the few resources that I had?’ [Dawn]

p>Update: Here is Ajmal’s narrative of the path he took and it partially contradicts his parents.

Of course, many of the other residents of Faridkot are still in denial:

In interviews, residents variously claimed Kasab does not exist or is the son of a potter, a brick factory worker, a street vendor or is an 80-year-old man. “There is no Ajmal. There is no Kasab,” said Ali Sher, brother of the town’s mayor. “We have a list of each person who is registered to vote. There is no Ajmal…”

“It is totally baseless. There is no Pakistani role. They are not Pakistani,” Sher said. “He might be Afghan. He might be another nationality. We don’t know that guy, so how can we know if it’s true?” [Washington Post]

p>Does anything of Kasab’s story sound familiar? Sure it does. We have heard this many times before. Remember Dylan Klebold of Columbine? Here is a 2004 interview with his parents:

In their first interview since the Columbine High School massacre, the parents of one of the killers said they feel no need be forgiven and didn’t realize their son was beyond hope until after he was dead.

“He was hopeless. We didn’t realize it until after the end,” Tom Klebold said. [USA Today]

p>Finally, I recommend this great 2004 article from Slate which describes the differences between psychopathic murderers and other types (especially depressives):

…if you want to understand “the killers,” quit asking what drove them. Eric Harris and Dylan Klebold were radically different individuals, with vastly different motives and opposite mental conditions. Klebold is easier to comprehend, a more familiar type. He was hotheaded, but depressive and suicidal. He blamed himself for his problems.

Harris is the challenge. He was sweet-faced and well-spoken. Adults, and even some other kids, described him as “nice.” But Harris was cold, calculating, and homicidal. “Klebold was hurting inside while Harris wanted to hurt people,” Fuselier says. Harris was not merely a troubled kid, the psychiatrists say, he was a psychopath. [Slate]

111 thoughts on “The Last Victims”