BANGALORE, India — After years of being blamed for job losses in America and elsewhere, India’s high-tech companies and outsourcing firms are going through a downturn of their own. The global slowdown is forcing them to reduce hiring, freeze salaries, postpone new investments and lay off thousands of software programmers and call center operators.

Of course, as with many things in life, an economic “crisis” is often a relative thing. In the 70s & 80s, for example, the Natural and NAIRU rates (essentially the lowest possible unemployment rate w/o screwing other things up) were widely thought to be around 6%. Our recent 6.5% uptick in unemployment, by those standards, would have been seen as a blessing. And in a global context, the most recent US unemployment rate would literally be a godsend. For ex., France’s official unemployment rate - even in boom times – is way above this and the unofficial rate is probably closer to 10%.

So with that economic relativism in mind, what does a crisis look like through the eyes of Infosys? A mere 13-15% growth –

Infosys recently scaled back its projections for the year, telling investors that it now expects revenue to expand 13 to 15 percent, instead of the 19 to 21 percent it had forecast and far below the 30 percent annual expansion the company had been used to. 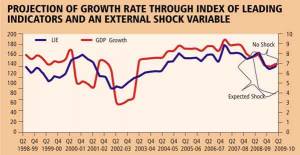 Even India’s broad economic growth forecast is still pretty heady (of course, this reflects the fact that the Desh is coming from a pretty low base) –

New Delhi: A day after Prime Minister Manmohan Singh said India’s growth may come down “somewhat” this fiscal, Goldman Sachs lowered its forecast to 6.7 percent from the earlier 7.5 percent on account of the impact of global financial crisis.

The leading investment banker and corporate consultancy has also revised the growth numbers for the next fiscal to 5.8 percent from 7 percent, in a clear sign that the global slowdown is impacting India more seriously than predicted earlier.

p>Still, that doesn’t mean that folks aren’t getting hit where it really hurts -

In a country where most marriages are arranged by parents, the downturn has even taken a toll on the matrimonial prospects of those in technology outsourcing. “Because there is no job guarantees for I.T. people, for the last six months brides’ families have not been accepting grooms from this background,” said Jagadeesh Angadi, a matchmaker in Bangalore.

42 thoughts on “Trickle Down Recessionomics”