The Oscar buzz has already started and it’s only been one day since “Slumdog Millionaire” was released. So far, the new offering from British director Danny Boyle (of Trainspotting fame) has been referred to by The New York Times as a film that “could be the breakthrough work that leads the world to focus on the genre …of Parallel Cinema, a more personal narrative type of film like Mira Nairâ€™s art house hit â€œMonsoon Wedding.” 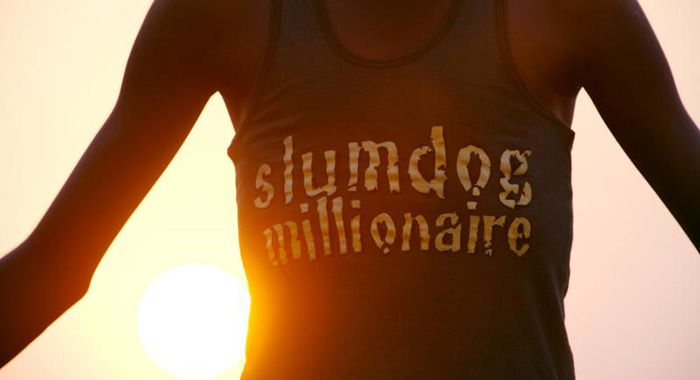 And, Roger Ebert predicts the film will win an Best Picture Oscar nomination, calling it “a breathless, exciting story, heartbreaking and exhilarating at the same time [whose] universal appeal will present the real India to millions of moviegoers for the first time.”

When you read gushing reviews like Ebert’s, you can’t help but walk into the movie hall with high expectations, wondering whether a film can really live up to all the hype. The answer is: Yes.

“Slumdog Millionaire” is being billed as a film about “first love, determination, and realizing your destiny.” Not quite the pitch that you’d expect from a mainstream film about a kid from an Indian slum. This is a film that will surprise viewers who think they’re going in to watch a movie about India’s tremendous poverty and rich-poor gap. It switches swiftly between scenes that take you into an India that is at once poor and wealthy, moral and crime-ridden, developed and undeveloped, hopeful and disappointing. And, though the story is laced with a trace of Bollywood romance, goondas, and some implausability, it is for the most part, as Roger Ebert says, “real.” Add to that a soundtrack by A.R. Rahman and Danny Boyle’s directorial talent for bringing India’s sensory overload and motion to life without the typical exoticism or “oh those poor things” mentality and you have a winner.

More of my review below the fold. The premise of “Slumdog Millionaire” is the same as that of Vikas Swarup’s 2005 novel Q&A where Jamal Malik (admirably played by British-born Dev Patel), an 18 year old from the slums (in Swarup’s book, it’s Dharavi) gets a spot on India’s version of the international hit show, “Who Wants to Be a Millionaire.” (That would be “Kaun Banega Crorepati?” which became a national phenomenon in India in 2000 and was hosted by Bollywood bigtimer Amitabh Bachchan.)

In Boyle’s onscreen version, the host of the show is Prem Kumar, a Bollywood star (played by Anil Kapoor) who also rose through the film industry from the slums. Prem Kumar does not find it plausible that Jamal, a poor “chaiwalla” who works at a call center, could actually know the answers to questions like “Who is the US president on a $100 bill?” or “What does the Hindu god Ram always hold in his right hand?” or “Who invented the first revolver?” and has him arrested after he makes it to the Rs. 10 million marker.

I have been holding on to Swarup’s novel “Q&A” since this summer and picked it up after watching the movie to see how the two compare [read Amardeep's review of the book here.] I usually don’t like to say that a film version has improved on a a book, but in this case I have to admit it’s true. The screenplay of “Slumdog Millionaire,” adapted by Simon Beaufoy (Miss Pettigrew Lives for a Day, The Full Monty) takes Swarup’s intriguing premise and brings it to life in a plot that is less complicated, which is a good thing for the big screen. In Swarup’s novel, Jamal is Ram Mohammad Thomas, an orphan who is raised in Delhi by an English priest. I’m glad that the film starts and ends in Mumbai, for it allows viewers to witness the transformation of “Bombay to Mumbai” over the past decade and a half. 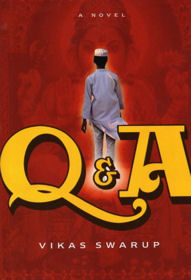 In Swarup’s novel, the protagonist’s questioner is a female attorney, Smita Shah, and the questioning takes place in the comfort of her home.

“Look, Ram, don’t get agitated. I meant no offence. I really want to help you. But if you didn’t cheat, I must know how you knew.” “I cannot explain.” “Why?” “Do you notice when you breathe? No. You simply know that you are breathing. I did not go to school. I did not read books. But, I tell you, I know those answers.” “So do I need to know about your entire life to understand the genesis of your answers?” “Perhaps.”

The dialogue in “Slumdog Millionaire” is snappier, more natural. The movie opens in a prison cell where Jamal is being prodded, pushed, and tortured to reveal how he “cheated” on the game show. When even electric rods do nothing to get him talking, the police inspector (played by Irfan Khan who never ceases to impress me) takes him into his office, pops in a DVD of the gameshow, and begins to grill him on how he came up with his answers.

As Jamal tries to explain, his life story unfolds in a series of flashbacks. I don’t want to give the surprise away, so I won’t tell you more about this story, but suffice it to say that you will meet a street-smart, sensitive, and intelligent protagonist who is capable of diving into a pond of feces to meet his favorite Bollywood star (a scene that will stay with you for a long, long time) and savvy enough to survive as an orphan on the tough streets of Bombay. This is a story of sibling rivalry, but it is also a story of love that takes you into crime dens, call centers, entertainment sets, and tourist traps. And, it has a funny side. All this makes for fascinating viewing, and during the two-hour run, I rarely lost interest.

But, there was one question that kept popping up in my mind: “How is it that Jamal speaks such good English?” (The first half of the film alternates between Hindi and English and the second-half is mostly English). So far I haven’t read any reviews that question how it is that an uneducated boy who has spent most of his life on the streets can speak English in an Anglo-Indian accent, similar to grads of The Doon School. Maybe it doesn’t matter and it’s a matter of suspending disbelief. After all, if this was to be a commercial film, language was likely a consideration. And, yet, I keep being reminded of “City of God” where the language of choice was Portugese. I wonder whether sticking with Hindi would have added a layer of authenticity to the film?

In Swarup’s book, I did find an answer to why his main character speaks English:

Father Timothy was from the north of England, a place called York, but had been settled in India for very many years. It was thanks to him that I learnt to read and speak the Queen’s English. He taught me Mother Goose Tales and nursery rhymes. …

So, here’s my advice: Go see “Slumdog Millionaire” as soon as it comes to your city (it’s being released on a staggered schedule) and pretend that a scene that explains how Jamal learned the Queen’s English was cut for a very good reason. You’ll enjoy it much more that way.

Update: Thanks to “inothernews” for the link to the NPR story. I learned that the original screenplay was all in English, so that Boyle and team could get funding, but when they arrived in Mumbai and started shooting, they were convinced by the Indian co-director Loveleen Tandan that the film wouldn’t work unless they added Hindi. Apparently that caused a bit of a problem with his French and English backers.]

And, here’s a trailer for your viewing pleasure.