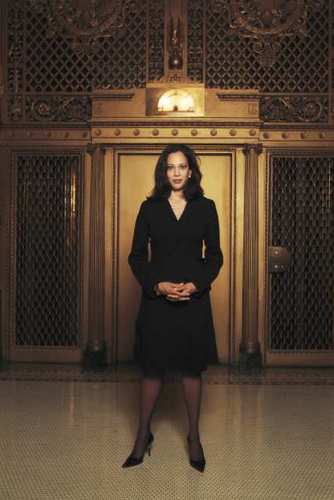 Election Day may have only been seven days ago, but here on the West Coast San Francisco District Attorney Kamala Harris has her eye on 2010.

San Francisco Dist. Atty. Kamala Harris, one of Barack Obama’s earliest California backers, announced today that she is running for California attorney general in 2010…She would replace Atty. Gen. Jerry Brown, the former Oakland mayor and California governor, who is expected to run for governor in 2010.[latimes]

Harris’ announcement was tempered with one, arguably big, caveat: Should current Attorney General Jerry Brown not run for governor in 2010, she would not pursue that office.

Should Harris not run for Attorney General it is believed that she would readily accept a political appointment as perhaps a deputy attorney general with the U.S. Justice Department. Harris has been a near tireless supporter of President-elect Barack Obama and is believed to be a short list of people Obama is considering for appointments to the federal department.[politickerca]

She would be the state’s first female attorney general and the first, in decades, who started out as a courtroom prosecutor.[latimes]

In December 2003, Harris was elected as the first woman District Attorney in San Francisco’s history, and as the first African American woman in California to hold the office. She was overwhelmingly reelected to a second term in November 2007.[politickerca]

Her mother, Shyamala Gopalan, is a breast cancer researcher. Her sister, Maya Harris, is a vice president at the Ford Foundation. Her brother-in-law, D. Anthony West, an attorney at the San Francisco law firm of Morrison & Foerster, is among the Californians who could receive an appointment in the Obama administration.[latimes]

â€œNow, I want to take that same energy, innovation and change to the state level. I’ve spent my entire professional life in the trenches as a courtroom prosecutor. And I can tell you from the frontlines, we need tough new ideas for strengthening our criminal justice system in California. As Attorney General, I will fight for all Californians â€“ from distressed homeowners to families whose neighborhoods are under siege. In the coming months, I will detail new ideas on how we can fight street gangs, go after subprime lenders and others responsible for the financial crisis, and fundamentally reform our prison system.”[caprog]

Good luck, Kamala. This is definitely a race that we will be keeping our eye on.

64 thoughts on “Coming Up Kamala”