Last Wednesday night, I had the chance to sit in on a fascinating conversation on â€œReligion and the Imaginationâ€ with Salman Rushdie. The author of Midnightâ€™s Children [soon to be adapted for film by Deepa Mehta], The Satanic Verses, Haroun and the Sea of Stories, and East, West was, of course, the perfect person to launch Columbia Universityâ€™s newly founded Institute for Religion, Culture and Public Life. The Instituteâ€™s mission is to â€œbring together scholars and students in various fields to reflect and respond to the issues brought about by the â€œresurgence of religion and, with it, religious and cultural intolerance and conflict [that] are emerging as powerful forces in the new century.â€ 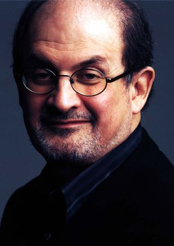 Orhan Pamuk, the 2006 Nobel Laureate in Literature, introduced Rushdie as someone who has been â€œfighting religious intolerance with humor, proving that we can fight moral seriousness with humor.â€

The stage in Columbia’s always inspiring (and very crowded) Low Library Rotunda was set simply with two arm chairs–one for Rushdie, who was was all suited up, and the other for his â€œinterviewerâ€ Gauri Viswanathan, Professor of Religion and Comparative Literature, dressed as always, in a sari. The conversation was an intellectual one peppered with doses of Rushdieâ€™s subtle (and sometimes pointed) humor and the topics of conversation ranged from everything to his relationship with religion and his hopes for robust religious debate to his thoughts on Obamaâ€™s win earlier that week.

â€œWe donâ€™t live in a world of drama, dance, and love… We live in a world of death, destruction, and bombs… Iâ€™m hoping something happened on Tuesday that will change that,” Rushdie said, referring to the election of Barack Obama. “I have no utopian tendencies. Iâ€™m good at seeing what I donâ€™t like. But this week, I do feel optimistic,â€ Rushdie laughed. â€œItâ€™s an odd feeling, one Iâ€™m not familiar with. The last time I felt like this was after the election of Tony Blair and look what happened!â€ Rushdie paused as the audience chuckled at his dark skepticism, then added, â€œ I hope itâ€™s not that way this time. Actually … I donâ€™t think it is.â€

More on the eveningâ€™s highlights below the fold. Professor Viswanathan got the evening started by asking, â€œWhat does literary imagination add to religious imagination?â€

â€œAll literature began as sacred literature,â€ said Rushdie. â€œThere arenâ€™t words to express some things except religious words, for example, the â€˜soulâ€™. I don’t believe in an afterlife or heaven or hell, yet there isn’t a secular word for that feeling that we are not only flesh and blood. Whether you’re religious or not you may find yourself obliged to use language shaped by religion. … As Arthur Koestler wrote, â€œThereâ€™s a ghost in the machine.â€™â€

What Rushdie says he has found most useful about religion is its power to create myth, which he does draw inspiration from in his writing. â€œThe amount of complexity pushed into a small storyâ€ is what impresses him, he said, giving an example of how a single myth can be interpreted in so many different ways. This, according to him, is similar to what religions have in common; a single religious text can also be interpreted in myriad ways.

Gods, the way he sees it, were invented by human beings to answer the two big questions of life: One, the question of origins: “Where do we come from?” Two, the question of ethics: “”How should we live?”

“I donâ€™t need religion to answer those questions,â€ said Rushdie, proposing that religion has been wrong on both counts. â€œRegarding origins, I think you can say [they are all wrong.] The world was not created in six days and God rested on the seventh. It was not created in the churning of a giant pot. Or the sparks unleashed by the udders of a giant cow against the boulders of a a gigantic chasm. And regarding ‘how shall we live,’ I don’t want answers that come from some priest. â€¦ When religion gets in the driving seat, it becomes an inquisition. I would prefer that the answer to these big questions came from debates. The debate is the thing from which flows the ethical life.â€

And, yet, Rushdieâ€™s books have and do take on religion and ethics and the supernatural. How come? How does he square the two?

â€œMiracles, magic, imagination, they all argue inside me. I donâ€™t reconcile them,â€ Rushdie laughed. â€œCreative writing is an implicit argument against pure rationalism. The way an imaginative piece comes to life is mysterious. The bit of me sitting here [in this hall] is rationalistic, but when Iâ€™m writing books, something weird happens; and the result is what you would call supernaturalism. As a person, I donâ€™t need it. As a writer, I need it to explore the world. That tension, itâ€™s just there. Itâ€™s just so.â€

Later on that evening, Rushdie acknowledged that though he canâ€™t quite explain it, he does believe in the â€œmystical experienceâ€ or the â€œphenomenon called revelationâ€ that St. John the Divine and Joan of Arc experienced. I donâ€™t want to put words in his mouth, but it sounded to me like he was hinting that there may be a bit of revelation in the writing process as well.

Given the mission of Columbia’s new Institute, it was natural that the conversation should steer toward questions of conflict and religious extremism. Rushdie lamented the self-destructiveness within religions and praised the creation of Columbiaâ€™s Institute for its role in promoting healthy debate and discussion on the role of religion in public life. He talked about how his attempt to depict early convulsions of the birth of religion (namely Islam) in Satanic Verses was viewed as heretic.

“There is so much contemporary scholarship about the origins of Islam,” Rushdie said. “If you insist that the text is the uncreated word of God, then the social and economic conditions of the Arabian peninsula in the seventh century are unimportant, because God works on a broader canvas than that. If, however, you are willing to look at the text as an event inside the history of the period, it illuminates the text. And I think it’s a tragedy that it’s not really acceptable to do this inside the tradition.”

â€œItâ€™s a great shame in the world of Islam that so much contemporary scholarship is not permitted because of the divine origin notion,â€ he said. â€œâ€¦ because historicizing the text would really open up and illuminate it.â€

During the course of the evening, Rushdie reminisced somewhat nostalgically about the Islam he knew as a youth. â€œI grew up in that world where people could still be devout Muslims (like my grandfather who prayed five times a day) and yet, we as children, could make fun of him, asking him why spent more time with his bottom up in the air than not … Heâ€™d get cross with us, but also laugh and invite us to debate with him.â€

Something I didnâ€™t know before this evening was that Rushdie is not really Salman Rushdieâ€™s family name. His father invented it because he was an admirer of the philosopher Ibn-Rushdie.

From the Huffington Post, this passage captures (near-verbatim) the points that Rushdie made:

One of the reasons my name is Rushdie is that my father was an admirer of Ibn Rush’d, the 12th century Arab philosopher known as Averroes in the West. In his time, he was making the non-literalist case for interpreting the Koran.
One argument of his with which I’ve also had sympathy is this: In the Judeo-Christian idea, God created man in his own image and, therefore, they share some characteristics. By contrast, the Koran says God has no human characteristics. It would be demeaning God to say that. We are merely human. He is God.
Ibn Rush’d and others in his time argued that language, too, is a human characteristic. Therefore it is improper – in Koranic terms – to argue that God speaks Arabic or any other language. That God would speak at all would mean he has a mouth and human form. So, Ibn Rush’d said, if God doesn’t use human language, then the writing down of the Koran, as received in the human mind from the Angel Gabriel, is itself an act of interpretation. The original text is itself an act of interpretation. If that is so, then further interpretation of the Koran according to historical context, rather than literally, is quite legitimate.
In the 12th century, this argument was defeated. It needs to raised again in the 21st century.

â€œI wouldnâ€™t mind having another go at that,â€ Rushdie told the audience, aligning himself closely with his 12th century namesake.

During the course of the evening, Rushdie mourned the loss of the â€œcomposite culture of Kashmir which used to be neither Muslim nor Hinduâ€ and where members of both religions would stop by the same roadside altars to pay homage to Sufi saints. â€œItâ€™s sad to see that gone,â€ he said. â€œThe self-destruction of Muslim culture by other Muslims is a grievous wound.â€ (One audience member was quick to point out to Rushdie in the Q&A session that followed that Hindus and Muslims in India do both still pay homage to Sufi saints, even in Kashmir.)

Referring to the fatwa placed on him and the perception of his work as anti-Islamic, Rushdie argued, â€œIdeas shouldnâ€™t be seen as being antithetical to argument,â€ pointing out the argumentative Jesuit tradition as an example. On another occasion, Rushdie has said, â€œAll other major religions have gone through this process of questioning, but remain standing. An Islamic questioning might well undermine the radicals, but it won’t undermine Islam.â€

â€œRelativism is the dangerous death of liberalism,â€ Rushdie said, calling himself a believer in universalism. â€œWe human beings are more genetically the same than we are not so there are universal rights and culture or religion canâ€™t be an excuse to say â€œLet them kill novelists because itâ€™s what they do!â€

â€œThe answer to religion is not no religion but finding another way to be with religion,â€ he proposed, arguing for a world where â€œthere is no suppression of religion.â€

He thus supported his position:

â€œWe are language animals and we have to be allowed to use language. This is a universal right. You take language away from human beings and you take humanity away. Similarly, we are dreaming animals who live richly through our imagination. You have to imagine the hyperlink before you can construct the hyperlink. You have to imagine the wheel before you can construct the wheel. What starts as a dream becomes a reality. To tell us there are dreams we can have and we canâ€™t have is a crime against humanity.â€

It was an inspiring and relevant evening, where Rushdie came across at times as an idealist who still dreams of pitching a tent where ideas can be discussed. “Ideas are not permanent so maybe a tent is a good place to discuss ideas,” he said at one point in the evening.

66 thoughts on “Rushdie on Religion and the Imagination”