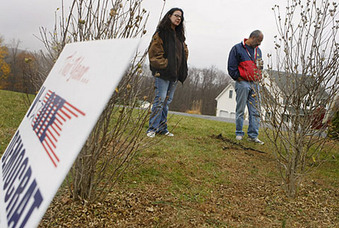 An anonymous tipster emailed us about a disturbing story out of dirty Jersey:

A family who had supported Barack Obama’s presidential campaign emerged from their home in the northwestern New Jersey town of Hardwick Thursday morning to find the charred remnants of a 6-foot wooden cross on their front lawn.

Pieces of a homemade bedsheet banner reading “President Obama , Victory ’08,” which had been stolen from the yard the night before, also were found, leading investigators to believe the banner had been wrapped around the cross before it was set afire.

Lt. Gerald Lewis of the New Jersey State Police said his agency is treating the incident as a bias crime. [philly.com]

And why is that?

â€œEven though the victims are not African-American, it is being treated as a bias crime,â€ Jones said, noting the combination of a cross â€” a â€œwell-known iconâ€ â€” and Obamaâ€™s race. [PoconoRecord]

Obama received a mere 38% of the votes cast in Hardwick. The area is rather snowy:

So to recap: the evening before the cross-burning, Gary Grewal noticed that the homemade sign his Cuban-American wife and eight-year old daughter made to celebrate Obama’s win was missing. He called the police to report its theft. The next morning, while he prepared to drop off little Arianna at school, she recognized the remains of her banner, near the charred cross.

“She saw it, that’s what bothered me the most,” Grewal said Thursday. “You can imagine the types of questions she was asking. It was very tough to explain.” [philly.com]

â€œItâ€™s so sad. This is such a cute, quaint town. Thereâ€™s so much hate and anger, and it shouldnâ€™t be that way. Weâ€™re all Americans regardless of our personal affiliations.â€ [PoconoRecord]

People are speaking out against the crime, according to Uncle G:

In response to the incident, Grewal said several Hardwick residents called them to show support.

Though Gary Grewal is originally from India, he is adamant in his belief the crime was not a personal one. He said he was scared upon finding the cross, but had to â€œsugarcoatâ€ the situation because his daughter was with him.

â€œItâ€™s unnerving. A couple people can undo the reputation of the entire town,â€ he said [PoconoRecord]

The Grewals live in a Republican nabe, and reported that Obama signs were regularly stolen from their lawn; interestingly enough, Mrs. Grewal noticed that signs for other democratic candidates whom she supported were left untouched.

Grewal’s wife, Alina, whose parents left Fidel Castro’s Cuba to come to America, was active with the Obama campaign in the county. She said several Obama signs have been stolen from her lawn, but never the other Democratic candidates.

Instead of being intimidated, Gary and Alina Grewal have been emboldened.

“I don’t want anyone to dictate to me and my family how to live,” Alina Grewal said. [nj.com]

Her husband had this to say:

“I’m not going to be intimidated by something like this,” Grewal said. “I don’t go on anyone’s property and do this. God forbid if I was African-American. We’re living in the 21st century, and we’ve got to be afraid to express our beliefs?”[philly.com]

Grewal described his community as a nice place “with many wonderful people.” But he said his daughter is afraid to sleep in her room, knowing someone was on the lawn while they were home.[philly.com]

I think with parents this fierce, she’ll be okay:

All right, which of you mutineers grew up in Hardwick and will now regale us (anonymously, natch) with stories about how the klan is actually somewhat active nearby (or so I read, in a comment elsewhere)? Or are you surprised that this could happen, at all?

104 thoughts on “The Grewals heart Obama, wake up to a cross-burning for it.”