As the world hopes / prays / waits for an impending Obama Presidency, OpEds like this one are surfacing asking “what would it mean for us over here?” Writing for the Times of India, the wonderfully multi-syllabically-named Swaminathan S Anklesaria Aiyar takes a look at how Obamanomics might affect the Desh –

Barack Obama looks certain to beat John McCain and become the next US president. Most Indians will be delighted. An Obama victory will symbolise the vanquishing of racism and the dismal Bush legacy.

…Yet, a look at the voting record and campaign content of the two candidates suggests that McCain might in many ways be better for India than Obama, especially on economic issues.

…pressures will mount for protectionist measures and beggar-thy-neighbour policies in the US, hurting countries like India. Apart from erecting import barriers and subsidising dumped exports, US politicians will seek to curb the outsourcing of services to India. Visa curbs will slow the movement of skilled workers and their dollar remittances back to India. McCain is one of the few American politicians in either party with the courage and conviction to stand up to protectionist populism. By contrast, Obama embodies protectionism.

p>Operationally, we have a pretty tough time determining standards for our own rich selves much less figuring out which of our norms should be applied in the 3rd world. And let’s not get into enforcement and all its unintended consequences. Cynically, such talk is likely instead a way of stitching together the trade unionist and anti-globalization votes – progressive lipstick on a protectionist pig perhaps but not an effective way to address 3rd world poverty. 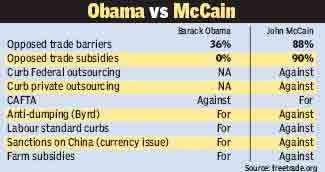 While trade policy has an overt, direct impact on the Desh, other, more important policies could have an even bigger indirect impact. For example, that old issue of farm subsidies impacts the global economic sustainability of the largest profession in India -

…Obama favours extensive subsidies for US farmers, hitting Third World exporters like India. This has been one of the issues on which the Doha Round of WTO is gridlocked. McCain could open the gridlock, Obama will strengthen it.

p>While subsidies distort the agro market in one direction, Bush’s bioenergy mandates have helped distort the market from the other side. Unfortunately, this is one incumbent administration program Obama is likely to not only preserve but probably expand - 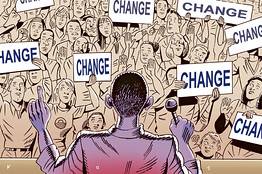 …Obama also favours subsidies for converting maize to ethanol. The massive diversion of maize from food to ethanol has sent global food and fertiliser prices skyrocketing, hitting countries like India. But McCain has always opposed subsidies for both US agriculture and ethanol. While campaigning, he had the courage to oppose such subsidies even in Iowa, an agricultural state he badly needs to win if he is to become president.

p>And so, as the world hopes that the next 4 years will be a marked break from the previous 8, Aiyer sums up his hopes thusly -

So when Obama wins, don’t cheer too loudly. It will be great to have a black US president. It would be even greater if he followed McCain’s economic policies.

Personally, I’m willing to attribute many of these positions to old fashioned campaign season rhetoric. Key Obama econ staff / advisors / supporters are pretty emphatically on the record as trade supporters even though the campaign may have taken on a life of its own. Still, this sort of pandering is doubly sad given the campaign’s pride in taking the intellectual high road. So ultimately, perhaps this is one place where I’ve got the Audacity of Hope that campaign promises won’t be kept.

47 thoughts on “…And How Would He Affect India?”