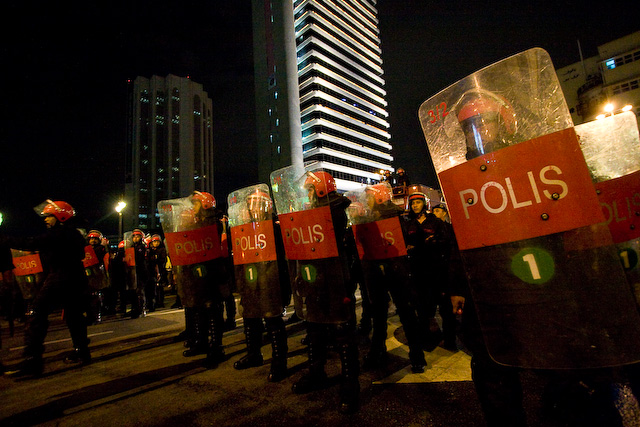 Happy Deepavali! Today I am wearing a new shirt and eating truffles. (Delish.) What a pleasant time! Other people are having a lovely Deepavali too, I hope and assume. Probably including the ten Malaysian Hindraf activists sprung on bail just in time for hols.

Per The Economic Times:

Shut UP! Malaysian government dudes, you guys are SO nice! SO generous! Especially considering what they did, gathering outside the PM’s office to deliver a memo…

To review, Hindraf (the Hindu Rights Action Force) is a group in Malaysia that protests what The Economic Times calls “perceived discrimination against the [country's] estimated 2.6 million ethnic Indians, a bulk of them Tamil Hindus.”*

And as of earlier this month, Hindraf is banned in Malaysia. Longer backgrounder here, via SAJAForum.

*(Don’t get me started on my rant about news organizations using the word “perceived” for something they can damn well report on. Aren’t you supposed to be government watchdogs? Is there discrimination? Or isn’t there? Hint: there is.)Anyway, the ten Hindraf activists hanging out near the PM’s office were there to deliver a memo asking for the release of several of their leaders, who are being held indefinitely under Malaysia’s Internal Security Act (We-Can-Do-What-We-Want-And-You-Can’t-Stop-Us). The ten memo-delivering Hindraf activists were subsequently detained… along with ONE SIX-YEAR-OLD GIRL. (I repeat: six.) Her father is the Hindraf chairman, who is in self-imposed exile in London; her mother was one of the women detained.

I quote from NDTV’s site:

The Hindu Rights Action Front (Hindraf) has been banned “for promoting extremism” and not for promoting “Hindu rights or Indian rights”, Malaysian Home Minister Syed Hamid Albar has said.

I don’t believe you, sir.

“On legitimate issues, nobody can quarrel with them. But we are taking action because we consider the way they have gone about doing things, promoting extermism. “They said ‘our enemies are the Malays, the Muslims’. This is in some of their speeches. “They have organised 17 forums, 338 street demonstrations. We took a long time before taking action because we don’t want them to think that because they are a society that seems to speak for a certain race or religion, we take action,” he was quoted as saying in first of the two-part interview given to a website on Thursday.

A response from the Centre for Independent Journalism in Kuala Lumpur (thanks to Anil Kalhan of SAJAForum for the tip):

…the decision is a setback to freedom of expression and will only send the signal that dissent is not tolerated. Hindraf supporters have organised several gatherings to protest the Internal Security Act, in light of the detention of five of its leaders for two years in Kamunting. Its latest gathering on 27 September drew two thousand people… According to media reports, Minister Syed Hamid Albar was quoted as saying that the ministry was satisfied with facts and evidence that showed Hindraf had and was being used for unlawful purposes and posed a threat to public order and morality. The right to associate and expression is guaranteed under Article 10 of the Federal Constitution, albeit with restrictions through amendments passed over the years. CIJ believes that the issues highlighted by Hindraf are genuine and real socioeconomic and political problems faced by a significant number of people of Indians in Malaysia. The government has failed to engage and respond to the group and the issues they raised, which was one of the many reasons for the Barisan Nasional’s limited success in the March 8 elections. Banning the movement will not remove the frustrations and problems faced by the individuals, families and the community, especially when association is a fundamental human right. The best way for the government is to engage the group and work towards a more open and participatory solution.”

I don’t know if you get wishes on Deepavali. Pretty sure you don’t. I’m going to make one anyway–I hope that this is resolved in favor of equality and freedom of speech, and that the Indian communities of Malaysia remain strong and vocal, despite the banning of Hindraf.

(You may remember that I first came to this blog through a trip I took, last December, to Singapore and Malaysia. I was traveling with Preston, who had previously blogged for the Mutiny when he visited Kenya. He got us both permission to chronicle our new venture on SM.

We felt lucky to be traveling in those countries at a time of such political importance for the desi communities in Malaysia.

I think I’ve gotten all related posts, but please point out if I’ve missed something.)

Preston has also thoughtfully provided some pictures of a protest/vigil he was at when we were in Malaysia last year. There are also images of the police reaction. (The picture at the top of the page is from this same series.) 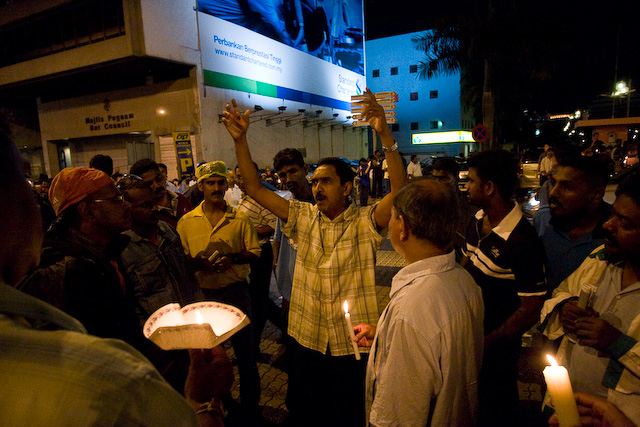 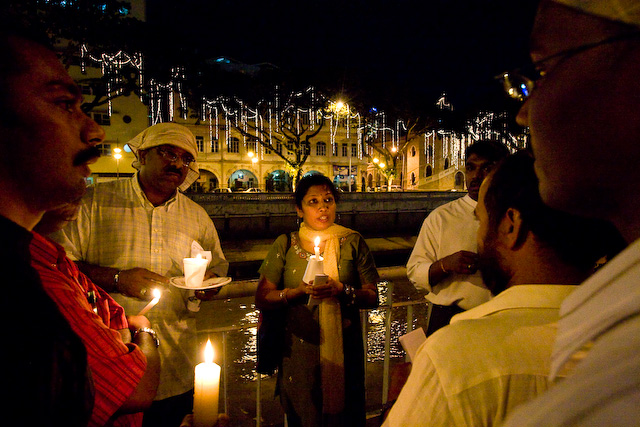 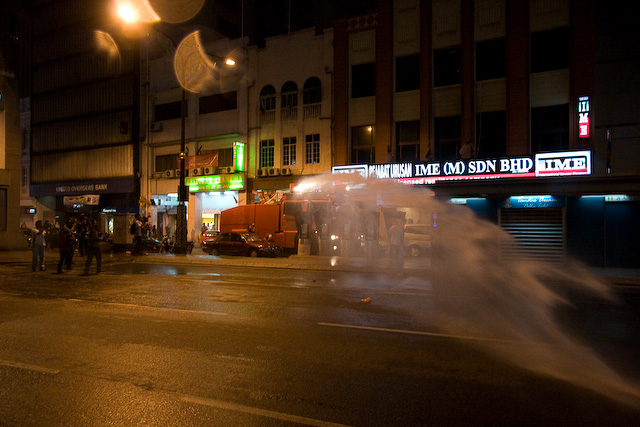 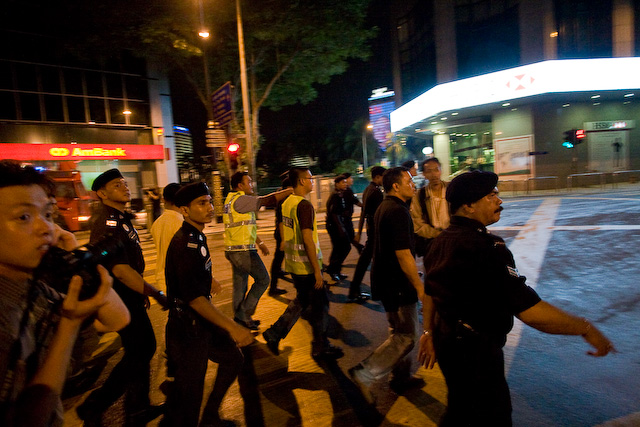 18 thoughts on “Happy Deepavali. We Will Let You Go Free on Bail (Malaysian Redux)”