What impact will the banking crisis and subsequent stock market collapse have on the developing countries of South Asia? According to one economist, not much. According to Michael Clemens at the Center for Global Development, no economic crisis has been very consequential in the medium to long term:

In historical perspective, many of the most worrisome recent crises are small bumps on a very long road. The entire effect of the 1994 so-called “Tequila” Crisis on per-capita real income of the average Mexican… was erased in exactly three years. In Thailand, epicenter of the 1997 Asian Financial Crisis, it took all of six years. In Indonesia, the poverty rate in the population was back to its pre-crisis level within just three years. Even the big, bad 1982 Latin American debt crisis … [had no long term effect]

Bad years are typically followed by offsetting good years, and good years by bad. The good years get smaller headlines, or none at all. The point is that in the long march of development, some financial crises amount to rounding error relative to the real economy, and the real economy affects welfare. [Link]

Clemens claims this is even true about the mother of all financial crisies, the Great Depression. Even this seemingly cataclysmic event, he argues, had no real impact on long term American growth. 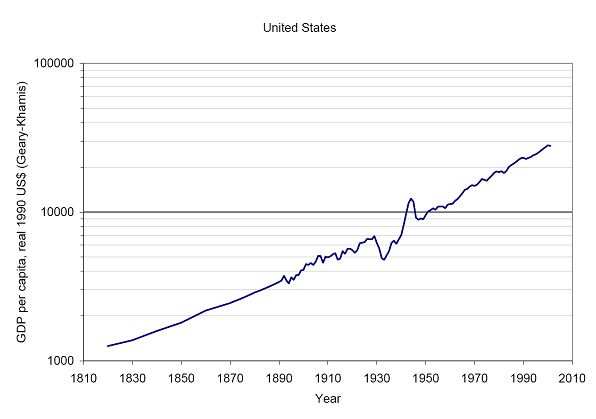 Other economists disagree quite strongly. One of them says that the such shocks can kill the worst off of the poorest, removing them from the population altogether so they don’t show up the next time per capital income figures are calculated:

A doubling of poverty, even if only for a year or two, has an impact on infant and child mortality, on schooling rates, and other welfare variables that have long-run consequences. I once calculated that the elasticity of mortality rates with respect to real rice prices (in Sri Lanka and Bangladesh) is about 0.1; that is, if rice prices rise by 10 percent, the mortality rate rises by 1 percent. It’s not hard to understand why: poor people die more frequently when their already diminished nutrient intake gets cut back. They “exit” the population, and thus do not show up in the calculated per capita income a decade later. [Link]

This is just a small taste of the ongoing debate. You can read the entire series of posts here (note, they’re mixed in with posts on other development subjects).