It ended up being me, Kissinger and a reporter from the Denver Post on a couch in a restaurant here in the Xcel Center. Here’s how adorably harmless Kissinger looked: 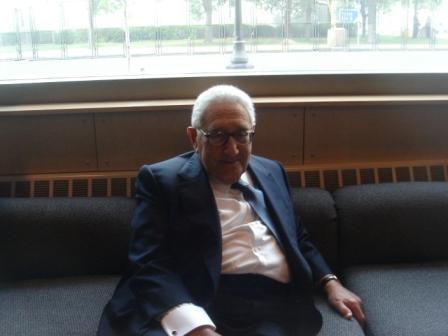 I didn’t ask as incisive questions as I should have. I was nervous, intimidated. I said stupid stuff. It’s really hard to hear him, although he perks up when he talks about India and sounds clearer, because it’s actually his line of work. Check it out.

You may want to go ahead and skip to “Continue,” so you can read the transcript as the audio plays (I didn’t want to put the whole thing on this page – too long).

M: I basically want to know how important you think foreign policy experience is in this election.

K: Foreign policy is my field I spend all my life thinking about it so obviously I think itâ€™s a key issue of our time.

M: Do you think Palinâ€™s lack of foreign policy experience is something that should be thought about?

K: Until recently I thought that primarily about Obamaâ€™s lack of foreign policy experience, that thatâ€™s the more relevant issue when people are voting.

DPR: And does the Biden pick help satisfy any concerns about Barack Obama?

M: As maybe McCainâ€™s first presidential decision, choosing Palin, what do you think that means? How significant is it?

K: It means that heâ€™s a man whoâ€™s prepared to think out of the box. That heâ€™s willing to do courageous and daring things.

M: To what end? What does Palin give him?

K: Look I am not participating in the political something or other thatâ€™s not my field, but it obviously has energized a lot of people on the Republican side but also has created the image of a leader whoâ€™s willing to do unorthodox things to show that he needs to change the direction of America.

DPR: On that point, have you ever seen a vice presidential pick so electrify the party, so unite a party or energize a party?

K: Well, Iâ€™ve never seen it in any party and I was talking when I was on BBC, I was told that the impact in Britain of the appointment, of her speech, was electrifying.

K: But you can check thatâ€¦

DPR: Right I saw that on the internet. So youâ€™ve not seen it in either party. Did it surprise you?

M: Did you have clear expectations for the speech, or were you…?

K: Of what the Vice President should say? No.

DPR: How important do you think Palin will be to the ticket then?

K: How effective will she be? I can only judge by the moment, by the impact she has already had (canâ€™t hear).

M: I have some Indian readers, I write for something else, and they actually wanted me to ask you what you think about the Indian American nuclear deal.

K: Thank god somebodyâ€™s asking me a question in my field.

M: Laugh laugh. They had a lot of questions actually in your field. I picked that one though.

K: I will be in Delhi and in Hyderabad

M: Okay. (Now I say something ridiculous.) My father teaches in Hyderabad.

K: Um. The Indian American nuclear deal. Itâ€™s been sort of an interesting experience looking at it because very clearly itâ€™s in Indiaâ€™s advantage, but it has been blocked until now by Indian domestic politics. Thatâ€™s the principle obstacle, and the imminence of an Indian election and the complicated arithmetic that that dictates. It looks to me now that as if itâ€™s going through and I believe it will be (not sure) bring our countries much closer together.

M: I know McCain, a lot of Indians have raised money specifically for McCain because he supports it. Iâ€™ve talked to many of them.

K: Well I have supported it from day one.

K: And theyâ€™re not raising money for me.

DPR: Apparently today in Obamaâ€™s meeting with the Oâ€™Reilly Factor, he said that he felt that the surge had been wildly effective, and thatâ€™s a departure from statements heâ€™s made in the past. What does that statement tell you about what weâ€™re going to see between now and the general election, and how do you rate him saying itâ€™s wildly effective now?

K: You have to judge people not by any one statement they make but by what it says about the conception of the issue theyâ€™re dealing with, and the time to judge these statements is when the outcome is not clear. And so that the progression from opposing the surge, instead of saying itâ€™s somewhat successful to itâ€™s wildly successful has to be taken into consideration.

DPR: Well how do you judge that? Is that just playing politics?

K: No but it means thatâ€™s instinctive judgment.

M: What would you call it?

K: Look I donâ€™t want to get involved.

K: I think the surge was the right strategy. It has been successful. You have to guard against the danger of saying everything can be done sequentially. In other words, in order to maintain the success we have to maintain provinces that protect the keep. We canâ€™t say because it will be successful now we can head out. We have to protect it for some period, the results of the success.

K: Yeah you can try.

M: How should I try?

K: Because I tell you when Iâ€™m in Delhi.

K: Get in touch with my office.

K: We used to have an ambassador in India who used to say, when I arrived at the airport, he would come with a big sign that said, â€œHow about 71?â€ So that then the Indians feel the question has been asked.

K: Then they donâ€™t have to ask it again.

M: Maybe Iâ€™ll do that about the Indian American nuclear deal.

M: Thank you so much.

50 thoughts on “Notes from the RNC, Post 6: Kissinger and Me”