Our whole time here, while we’ve been blogging, nobody has really asked Ravi or I what we do. I know what I am suggesting is silly. Why should they? We are Sepia Mutiny. We blog. A lot of them read the blog. What else is there other than that we are bloggers here to report? But that is not what we are and there is an important point here so bear with me. Blogging is just a hobby. It was created out of nothing four years ago and my personal objective was to gain access to this convention. Access to “power,” so that we could tell the story from the inside. We are still outsiders here though, both at the fundraising luncheons and in the press room where people keep bitching about how the celebrity press (Couric and Cooper) gets treated better. We are here because we claimed this spot. We wanted it bad enough because we see the potential our community has if they get more involved…and not by simply raising money. A life in politics where money is important isn’t the only way in. 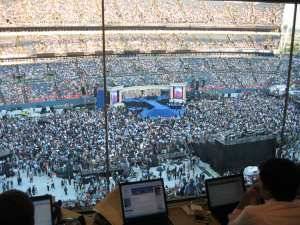 Ravi is about to enter college at Harvard next week and major in applied math. I have degrees in aerospace engineering and geology. We are not bundlers, politicians, or journalists. We aren’t getting paid a dime for any of this and we aren’t asking for a dime for our posts. We are doing what we do because we have something to say and something we believe in. For those of you sitting at home watching the coverage and thinking you have to be rich or an important politician to participate in this process I’d like to point you to an article about the headline speaker tonight. Sometimes you just show up and think on your feet because you believe in yourself and what you want to do:

The Democratic National Convention is akin to a longstanding family reunion. And eight years ago, Barack Obama was not on the guest list… He was drained of money and confidence, fresh from a punishing defeat in a Congressional primary race here. Even the Illinois delegation did not have room at the party’s gathering in Los Angeles for Mr. Obama, then a 39-year-old lawyer, who had annoyed some state Democrats for not waiting his turn to seek a higher office.

He persuaded a clerk at the car rental agency to overlook the unpaid balance on his credit card, and he made his way to the festivities. He was not a delegate — not even close to being a superdelegate — and without a floor credential he had all the sway of the junior state senator that he was.

“I have no memory of him there,” Senator Richard J. Durbin, Democrat of Illinois, recalled in an interview the other day. “It was a disastrous trip for him…”

When party activists gathered in Chicago to nominate Bill Clinton to a second term in 1996, Mr. Obama was making his first run for political office, but he did not have enough clout to get full access to the convention. Instead, he concluded that high-dollar breakfasts and dinners seemed to lock voters out of the system, grousing to a reporter, “The convention’s for sale, right?”… [Link]

This week I have been repeatedly “taught” that money equals access. And yet, Ravi and I are here with better access than many journalists we’ve met, not because we have money to donate but because we have a mission. I am sitting in the press box at the 50 yard line (pics coming later) waiting to hear Obama accept his party’s nomination 45 years to the day after Dr. King’s “I have a Dream Speech.” Someone pinch me. And then someone tell me to get back on the ball and give you more behind the scenes action so maybe you’ll be inspired by the events here to make your own change.

27 thoughts on “DNC Day 4: Strangers in a Strange Land”