Less than an hour ago I finished listening to Bill “Bubba” Clinton give his speech. Old boy can still bring the house down can’t he? Right before his speech I went on to the floor because I spotted a brilliant orange turban in the California delegation and knew I had my next post for our readers. The distinguished gentleman from California was Harpreet Sandhu, council member of the City of Richmond and a delegate:

Harpreet S. Sandhu is the first Asian, Sikh, and South Asian city councilperson of Richmond, California and a major city with over 100,000 people in Northern California’s San Francisco Bay Area. He was sworn in on January 16, 2007… He is the only currently serving sikh politician in the entire state of California and one out of only a few in the United States. He served on the human relations and human rights commission. Sandhu has been working to help out taxi drivers since recent crime has targeted them, both for opportunity and alleged hate. [Link] 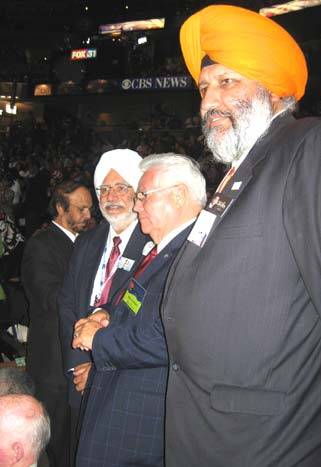 This is Sandhu’s first convention, although his daughter attended the previous one. I asked him why he got in to politics and he said it was Jimmy Carter that inspired him in 1977 when he was only 18 years old. And here is the best part, the part that I find very refreshing after the last few days in which I’ve been a little turned off by certain aspects of politics (I will explain in a later post): Sandhu comes from a humble professional background. He worked for the post office, like my grandfather:

While raising a family and working full time for the U. S. Postal Service, Sandhu has compiled an impressive public service rÃ©sumÃ© during the past 20 years…

Sandhu is probably best known as a strong advocate for creating safer working conditions for West County taxi drivers. After the Sept. 11, 2001, attacks, taxi drivers in West County — 90 percent of whom are Sikh — increasingly became victims of attacks. One driver was killed in 2003, and one was shot in the face in what appeared to be hate crimes, Sandhu said. [Link]

p>The other Sikh gentleman to the right of Sandhu (who I did not get a chance to converse with) is Daljit Singh of Visalia, CA. Dr. Singh got his first degree (political science) from Cal State Fullerton back in 1965. Now he is an emeritus professor of public administration, University of Guam, Mangilao, Guam. That’s right. Guam.

p>I was only able to talk to Mr. Sandhu for a few minutes because security wouldn’t let anyone sit in the aisle, even for an interview. Here is the part that trips me up though. The other two gentleman, Singh and the man on the far left wanted to talk to me even though I had to clear the aisle. They actually knew who I was and read Sepia Mutiny. I’m humbled. I will try and track them down tomorrow night to get their stories too if I can.

p>Also in the audience a few rows in front of where I was sitting was another trailblazer (although this one much younger). I spoke to Jay Goyal of Ohio’s 73rd district (state rep) this morning after the Asian American caucus met. He is in town not as a delegate but as a speaker and to do some networking. If I recall he told me that earlier in the week he spoke to a group of American’s living abroad and was making sure they were still plugged in to politics stateside. Later this week he has an even more important speech to give:

State Rep. Jay Goyal (D-Mansfield) will address participants of the youth council during the Democratic National Convention on Thursday in Denver.
Advertisement

Goyal will be among the guest speakers at a program called “Life of the Party: Celebrating the Youth Vote.”

Goyal, the youngest Ohio General Assembly member, will reflect on his experiences in the legislature.

“I was pleased to be asked to speak,” Goyal said. “When youth are engaged in the political process they take a greater ownership of their community. One of my biggest concerns in Richland County has been the great numbers of graduates who leave for college and don’t return.

“By getting young people involved in politics, we stand a better chance of keeping them here and benefitting from their talents. Some estimates put the number of young people who voted in this year’s primary as more than double 2004. [Link]

p>For the desis watching at home, the floor is teeming with brown folks.

…with 15,000 journalists covering the convention, i figured reporters would run into each other so often that they would neglect writing stories on some of the interesting delegates. you sir are to be commended for working above your pay grade because harpreet sandhu is my uncle (everybody’s your uncle with us browns but he’s my mom’s first cousin). at 6’5″ or thereabouts, he’s hard to miss. the postal worker story is nice but it’s not the most unique aspect of his trajectory. when he was younger and thinner, he was a great tennis player. good enough to briefly, very briefly, turn pro. but his parents didn’t want him to be an athlete and do what athlete’s do (travel everywhere and meet vestern vimmen!) so he had to quit. their house used to be filled with tennis trophies; today it’s trophies of a different sort, which belong to his kids- a couple of cats, birds and cages, a hamster, and some dinky dog.

my uncle’s political style is old school relationship building. people come in and out of his house constantly, similar to india, with sunday afternoons specially devoted to chit chat in the living room. he’s not a policy guy at all nor is he a verbose backslapper. i’m not quite sure how he builds those relationships but he does seem to be on message all of the time.

my uncle’s father was a class act, a true conciliator in a family of enormous egos. his father was the second in our family to arrive in the US (in the 1960s), following his older brother who came in the 1940s. he worked at a sugar factory in vallejo where in a life-defining accident, he lost his arm as his kara got caught in some machinery. he was unable to work but he had saved enough to start buying investment properties. he built a small fortune, teamed up with other sikhs in 1970s and built the first gurdwara in the bay area in el sobrante (next to richmond) in 1979. he also helped people immigrate here, found them jobs through his network and was a principled, honest joe, never shied away from settling disputes in the family. his was an ordinary immigrants tale in america yet remarkable.

19 thoughts on “DNC Day 3: On the shoulders of those who came before us [updated]”