Hello from Denver everyone – this is my first official post from the convention, although if you’ve been astute and checking out our very nice Tumblr page, you’ll have realized that its actually my third! One would think nothing would happen on a Sunday at the DNC – but then one would have missed the epic DNC “interfaith gathering” that took place this afternoon at the Colorado Convention Center. At this gathering, we had Catholic Priests, Jewish Rabbis, Pentecostal Ministers, Muslim Imams, Buddhist College Students, and Catholic Anti-Death Penalty Activists. Many of them spoke very well and inspiringly, and interestingly enough, they didn’t stick to the party line – Helen Prejean, an anti-death penalty activist, was to the left of Obama on the issue, while Bishop Charles E. Blake was to the right of him on abortion. One thing they could all agree on, however, was that the Democratic Party’s “Big Tent” was a good place for them to express their opinions and could offer a strong hope for future considerate policy. To read more about it, you can watch the whole video here, but I took a special interest in the speakers that would interest the Sepia readers.

There were three main parts of this interfaith gathering that had the most “South Asian relevance.” One was Kathryn Ida, the Buddhist college student who read a passage and that I briefly profiled here. Another was Ingrid Mattson, the president of the Islamic Society of North America, who I’ll get to in a moment. And last was a notable absence – the absence of any Hindu leaders at this interfaith gathering! Hindus make up a similar percentage of the American population to Muslims and Buddhists, and also identify overwhelmingly Democrat as a religious group. Alas, it was probably an oversight, but quite an unusual one for a Convention that has a sizable number of South Asian related events (see the next three days of posts). I’d like to add to the irony of the moment by wishing all the Vaishnavs out there a very happy Janmashtami =)

The Muslim-American community was recognized in full-force, with local imams assisting in opening and closing prayers, and Ingrid Mattson, the president of the Islamic Society of North America (ISNA), as a keynote speaker. There had been some controversy over her organization , and I really don’t know enough about ISNA or the speaker to judge, but her speech was strong and anything but controversial. The theme of her speech was “Our Sacred Responsibility to Our World” and she covered a variety of subjects including: 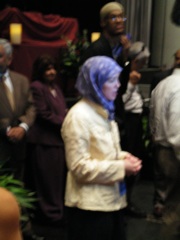 Her speech was well-received by the entire crowd, and afterwards SM had the chance to ask her a few questions (answers might be paraphrased due to speed of interview):How would you describe the mood of Muslim-Americans during this election year?

I see a lot more optimism among Muslim-Americans this year, along with a feeling of a responsibility to be involved, because I think we realize that if you are not involved, you don’t have the right to complain about what’s going on. Does your appearance here mean you support the Democratic party this year?

Not necessarily, as the head of a 501c(3) I have a responsibility to stay politically neutral… and would gladly accept an invitation to speak at the RNC as well.

Can you describe your organization?

We represent 100,000 Muslim-Americans, who are diverse from an ethnic and sectarian standpoint. We aim to have a big tent and model intrareligious pluralism…if you can’t be tolerant within your own community, its unlikely that you are going to be tolerant to those of other religions….We obviously do not have authority over mosques and other groups, but we set guidelines we suggest they meet such as:

How do you address the controversy raised by your speaking role in light of the recent Justice Department issues surrounding ISNA?

The ACLU has filed a motion on behalf of ISNA with the hope that we will be relieved of this problem and the entirely unwarranted accusations.

As the female leader of a major Muslim organization, how do you feel about the role of women in American Muslim communities?

I hope Muslim women understand that to commit to tradition does not mean to submit but to partner with other members of the faith to interpret the tradition independently and sift the wheat from the chaff. Sometimes the option is presented as either submission to or walking away from the community, but the role of women in Muslim communities should not be to be spoken about, but should be for women to speak for themselves. There are things such as misogyny and intolerance that have no place in the faith, and many women could walk away with so much good and valuable from the religious tradition.