Early in high school I weighed about 105 lbs soaking wet. I know, laugh if you want to. I am descended from two bean poles so I was at a genetic disadvantage. This was, after all, long before my collegiate boxing, my climbing adventures, and before I started appearing shirtless in “Boys of Blogging” calenders (ahem…cough cough). So just how does a 105 lb boy make his way in the brutal world that is high school? By laying low, very low. Most people don’t notice a scrawny little kid in high school (as many of our readers might sympathize with). I was also very very very shy. 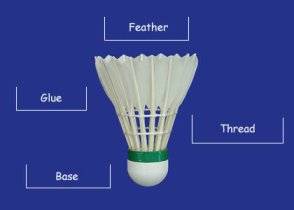 I hung out with the nerd/geek crowd at the first of the two high schools I attended. It wasn’t much fun as nothing exciting ever happens in the nerd/geek crowd. One day however, my friends and I hatched a plan. The only way that we could raise our station in life was to be on a high school sports team. Even JV would do. This would be our ticket out. But what could I play? Basketball was definitely out. I was a fierce defender but way too short. Baseball? I could play infield but could barely hit the ball out of the infield. Football? Ha Ha Ha. I was pretty good at indoor hockey on the gym floor and rough enough that one kid even tried to fight me for high-sticking his friend until the PE teacher broke it up. However, there is no gym floor hockey team in high school. And then, like a ray of light the answer was revealed. My high school would be holding try-outs for the…Badminton Team.

I was pretty good at badminton and my odds were good because none of the cool kids (who were also the more athletic kids) would EVER be seen anywhere near a shuttlecock. My svelte body would dart back and forth pounding that birdie mercilessly. The fact that it looked like a tiny upside down Apollo capsule re-entering through Earth’s atmosphere was just a bonus (although I could’t say that out loud or even the geeks would make fun of me). The problem was that the competition was cut-throat. All the other geeks were gunning for the same few spots. Many of them were also Asian or South Asian since, for some strange reason, Asians have a fascination with racket sports. Every day I practiced and practiced, honing my skills while huffing like a young Boris Becker of Badminton. Then, the day before the try-outs I came down with a cold and was battling flu like symptoms all day. After watching television while slumped in a couch I got up too quickly, got a massive head rush, passed out, cut my head open on my metal bed frame as I fell, bled all over the place, and had to get stitches in the ER. The doctor ordered me to miss tryouts the next day. I didn’t make the team. This was the single most scarring failure of my life. And that brings me to the point of this thus far depressing post: American Olympian Raju Rai. Geek has been replaced with chic.

p>That’s right! We have two Rajs in Red China right now and this one is teaching Beijing some shuttlecock diplomacy. Rai seems to be a new breed of Badminton player, much different than I was in the early 90s. Back then I assumed I should maintain a thin figure to retain my speed. Conversely check out Raju’s huge quads: 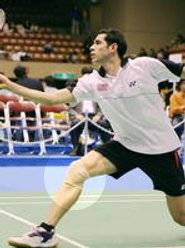 p>According to this video (set to the music of R. Kelly) this guy is as close to a sex symbol that there is in the world of Badminton:

My years of pain and disappointment end today. My dreams live on in Rai. Good luck and kick ass in Beijing!!

Here is the bracket y’all. Our boy is up on August 11th at 11:55a.m. I expect someone to be on the satellite feed and report results back to us here at SM.

P.S. It would just be a bonus if it was an all brown final.

65 thoughts on “Cocks of Fury”