Fascinated by the salsa dancers at night clubs in downtown San Jose, he started taking classes several nights a week. He was so good that his instructors, members of SalsaMania, a Bay Area dance group, invited him to join their professional team and compete in the US, Europe, and Mexico. This was back in 2001. 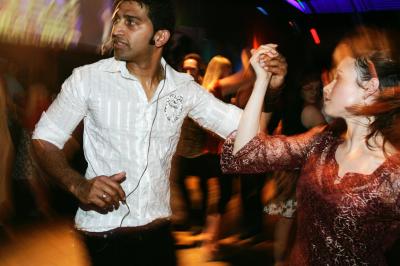 Today, John has a successful solo Hindi/salsa career. By way of the San Jose Mercury News:

John loved making microchips tick, but he loved his dancing, too. He remembered the Indian dance steps he learned as a boy. He noodled around, adding them to salsa steps and coming up with his own Hindi/salsa genre. He’s left Salsamania for a solo career. Yes, a Hindi/salsa solo career. Why not? John was in Silicon Valley – a place with a prominent Latino population and tens of thousands of Indians and Indo-Americans. He produced a CD, “Rang Rangeeli Yeh Duniya,” … It is a CD of Hindi language songs set to the pulse of salsa, cha-cha and rap. He shot a music video. He launched a start-up, Beyond Dreamz, to produce his music. And he continued to focus on the reliability of the next generation of Intel chips.

In February, John spent five weeks traveling through India offering Hindi/salsa dance workshops and promoting the genre and himself. But he didn’t take vacation. “During the day I’d go around and do my salsa workshops,” he says, “at night I’d log onto my network.” He says his bosses are very understanding. [full story]

Giju John is back in India right now, on a three month sabbatical. He’s giving his salsa career his all, shooting music videos, performing, and attending … the 3rd annual India International Salsa Congress in Bangalore from the 14th to the 20th of August. Who knew Salsa was so big in India?!

Next up, maybe we’ll spot Giju in a Bollywood flick set on the streets of San Jose?! I think we’ve definitely got a Hindi movie there. In the meantime, here’s a salsa music video from his first album.