Folks, it is time to get excited about the fact that we will have greater South Asian participation than ever in this year’s Presidential election. Through this blog we also hope to provide a perspective from the floor of the Democratic National Convention in Denver next month that has been missing in previous years. This has been one of the long term goals of this blog after all. I will sniff out every conceivable brown angle I can find once I get there (especially if Huma is there). However, I would like to make this event as bi-directional as possible. I don’t want to show up there and simply write about what I want to write about. I want you all to send me ideas for what you’d like to learn. I’d like you guys to get me in touch with other South Asians you know will be there. I also want to know what you’d like me to communicate to the other bloggers and citizens I meet while I’m there.

In the spirit of that last point, and so we can have some fun with this, I am asking you guys to dress me. That’s right. You, the SM readers get to decide what I will wear on the convention floor next month. It is simple really: design a t-shirt that features a political or social (but non-partisan) message and I can order it using CafÃ© Press, Threadless, or one of many other internet t-shirt companies. Send me the design at abhi [at] sepiamutiny dot com. I will narrow it down to the best entries and have SM readers vote on the finalists. I will be at the convention for three full days so I will purchase up to three winning t-shirts to wear on the floor. The more clever/funny/relevant/socially conscious your t-shirt, the more likely it is to grab attention and communicate your message to all the varied citizens expected to be in Denver (the picture below is a perfect example of what I’m looking for). Let’s have some fun with this. My mom (retired from a major department store) has been dressing me all these years. It’s time for you guys to have a turn.

Just a clarification: I am looking for full t-shirt Designs, not merely slogans or catchphrases. 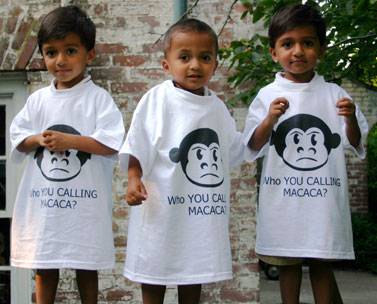 48 thoughts on “SM T-shirt contest: Making a Fashion Statement at the DNC”