There were two reasons that I was in Africa. The first one was that the mountain is there. I contend that every good journey involves a mountain high enough that it keeps a piece of you with it after you think you’ve gotten off. On top of the mountain is a doomed glacier of storied beauty that I needed to see before it melted into just a “once upon a time” memory described in a book or by an old man. The second reason I had long desired to come here was that my mother was born in East Africa (Uganda) and I wanted to feel a trace of what she once knew. Being under this sky, on this land, the pidgin that is Swahili ringing in my ears, I sought to better understand some part of her that ended when she was a teenager, a part that remained an unearthed root of my life. 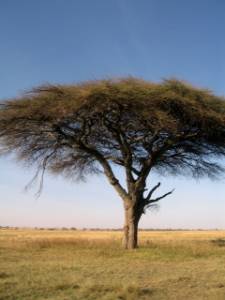 The South Asian quarter (Uhindini) of Dar es Salaam is where you want to be if you have only one night in one of East Africa’s largest cities and you blog for a South Asian themed website whose readers expect you to work around the clock. It is also where the food is the best mix of Indian, Chinese, and East African. The gem dealer from Sri Lanka recognizes us as fellow guests of the dingy hotel. Your first night in a country should always be spent at a dingy hotel, otherwise you won’t learn how things in that country really work (such as how much cab fares to locations in the city should really cost). He tips us off to the fact that the best money exchange can be found next to the mosque at the end of that street. A good restaurant (I have the mutton) is directly next door to the hotel. The 34-year-old sits down with us at dinner and explains that if we want to find nice girls (why aren’t we married yet?) all we have to do is provide them with a little jewelry and some spending money. He swears that those two things will keep them satisfied and they won’t ever talk of divorce. I decide to keep my “blood diamond speech” under wraps just this once, even though Africa is the most appropriate place for it.

The Muslim friend I’m with tells me to stick with him for protection in this part of town. Five minutes later and three blocks north we pass the Pramukh Swami BAPS mandir, services just ending. “Your on my turf now,” I tell him.

p>Closer to the hotel again, it sounds like some bar or disco is playing Bob Marley. Sweet. I wanted to check out a bar here anyways and this one apparently has good music blaring on a Saturday night. As we get closer to the source I see that the music I am hearing is in fact emanating from a large group of women sitting on a mosque floor. Yeah, it definitely wasn’t Buffalo Soldier I was hearing. It is probably not polite for me to keep staring like this either. Indian Point

There are two categories of routes that go up Kilimanjaro: the Coca Cola routes and the Whiskey Routes. Neither class of route is considered easy, given that the end point of every path is located at 19,340 ft, but the Coca Cola routes do come with wooden huts and bunk beds and a modicum of comfort. Over 5-7 days these are considered luxuries. We took a Whiskey Route (Machame) and camped in tents of course, since the journey matters.

Our guide Dizmus answers us politely when we ask how we compared to others he’s led. It is then that Dizmus, with a sly smile that makes him look much younger than he is, reveals a truth to us. When guides see Indians coming to climb Kili they know they’ve made easy money. Indians are never able to actually finish the climb to the top. Fortunately, we don’t count as Indian he tells us (but I wonder if he thought that when he first met us). Indians from “western countries” usually do finish, or give a hell of an effort. It is the Indians from India and Africa that the guides deride. The two other guides laugh, nodding their heads in agreement. 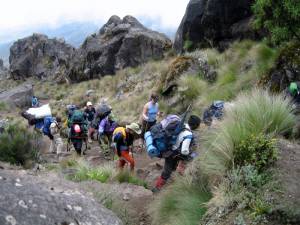 Dizmus: “You see, they all take Coca-Cola route. It has, what do you call…huts. If you have group of 20 Indians, by first hut only 15. By second hut only 10. By third hut only 4 remain. You know fourth hut, last hut? The guides call it ‘Indian Point.’ You know why?”

Dizmus: “All Indians quit by that point. Then they take a picture, then go buy a t-shirt to take home.”

He spreads his hands as if he is apologizing for telling us the truth and wonders if he has said too much and offended us (we’ve yet to tip him).

But my companions all laugh at this because they know it is likely true. We know friends and relatives just like this. The American inside of me thinks its funny but the Indian inside of me can only shake my head in embarrassment that this is the reputation. “Indian Point,” sound like a location I’d expect to take pictures at somewhere in the desert southwest of the U.S., not near the roof of Africa.

Yes, we finished. I think they call it Uhuru Peak because it is the point where your mind (receiving less than half the oxygen its used to but probably doesn’t need) declares independence from your body (which has just been slowing it down for days now anyways). There is no past or future there. There are no friends or guides in your field of view. There is only the empty blue present, which is just what you were hoping to find up here when you signed up. A few minutes touching the void is all you need.

After the climb and after a Safari (during which a monkey threw a rock at me) was the island. This island had for centuries been at the crossroads of empires (click on the picture below). The Arabs, Indians, Africans, Europeans all saw its strategic value. All came for the spices, which, by the way, is what I needed to bring back for my mom. She wanted cinnamon and cloves. 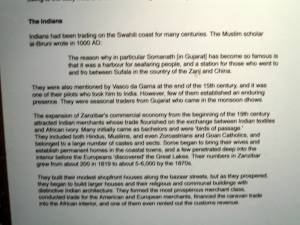 “Kem-cho?” I heard multiple times on the street, hustlers and shop owners trying to make a buck off this Mizungo. Sometimes I’d open my mouth, revealing my American origin, and the “Kem-cho” would be replaced by a question about what state I was from. My Korean friend had it worse. They tried a line from every Asian language EXCEPT Korean on her. She just about hugged the first guy that actually started with a Korean greeting.

Almost all the brown folks here were Gujus and many were Ismaili. In fact, whole areas of Stone Town reminded me of places in India I’d been. The only thing different was the skin color of many of the residents. My mother’s family took many trips back and forth between Uganda and Ahmedabad. In my mind I had always imagined a shocking contrast but I was beginning to realize that the similarities far outweighed the differences. If I walked through the fish market blindfolded then I might not be able to tell the difference between the Indian diaspora and the native Africans. This, after all, is the greatest reward of any trip: the realization that you may be able to assimilate in to yet another part of the world if you had to. Obviously, I was the lastest in a long line of people that had come to understand the same thing and stayed to make a life here in Zanzibar. 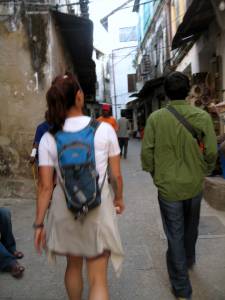 I kind of wish my mom was here. My dad gave her the phone because the front desk of my hotel couldn’t understand that he was trying to reach a guest staying there. “You mom spoke to her in Swahili.” Why did that make me so proud? She gave me a little book that had basic phrases in it before I left so I could get by. I used it some but I preferred instead to marvel at just how many words the natives had borrowed from the Indian coolies brought here decades ago.

My last night I waked down the narrow avenues of Stone Town alone. It was dark and three quarters of the shops (the Muslim ones) were closed because it was 7:00 p.m. and the owners were headed to the Mosques. I was making my way to the outdoor food stalls where the action was at. My friend and I had eaten here last night after our SCUBA diving adventure was behind us and we were willing to let down our guard. He had to get up in the middle of the night to puke his guts out but I enjoyed the lemony Red Snapper, Indian-style potatoes, and coconut nan, so I was headed back for more. God it was crowded in the alley. Mizungos everywhere but now that I was alone people thought I was native. A satisfied smile spread across my space. I duplicated the order from last night but added a fried banana dish to it. I sat down and stuffed my face with my hands, daring my guts to revolt against this goodness.

83 thoughts on “The Roof and the Root”