A news report a while back talked about the rapid adoption of in-car video cameras for cops on patrol & the qualitative changes it was introducing to law enforcement. In some quarters, the initial rationale for videotaping folks on the job was to keep tabs on the cops themselves. 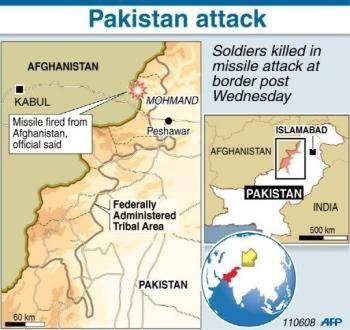 But, far more often, and the reason the cops themselves eventually became enthusiastic proponents of “dash-cams” was that they often helped defend their version of events.

Instead of the old world of conflicting accounts, presumptions, and testimonies, we’re now often able to hit the play button on the VCR and see some (but clearly not all) of the story for ourselves. A traffic misdeed coupled with efficient, lawful capture by the police, all caught on tape, more or less gaurantees a swift conviction in the eyes of judge and jury.

Interestingly, a recent incident in the GWOT has Pakistan up in arms and the narrative may similarly pivot around a critical, live video. A few days ago, front page news from Pakistan discussed how their forces were “cowardly” attacked by coalition forces on the Afghan border -

PESHAWAR, Pakistan (AFP) — Pakistan said a “cowardly” air strike by US-led forces killed 11 Pakistani troops on Wednesday near the Afghan border and warned that it had harmed cooperation in the war against terrorism.

The army accused the US-led coalition in Afghanistan of launching an unprovoked attack on a checkpost in Pakistan’s volatile Mohmand tribal zone while the foreign office demanded an investigation.

In an unusually harsh statement, a Pakistani army spokesman “condemned this completely unprovoked and cowardly act” and said 11 soldiers died in the overnight air strike, including an officer.

“The incident had hit at the very basis of cooperation and sacrifice with which Pakistani soldiers are supporting the coalition in the war against terror,” the statement quoted the spokesman as saying.

p>And in response, the US released footage from the GWOT version of the dash-cam, an unmanned drone -

The LAT’s coverage summarizes the video; an incident likely staged from a new military base SM covered earlier this year-

The gray, grainy 6 1/2 -minute video appears to show militants on a hilltop in Afghanistan’s mountainous Kunar province, a vantage point from which they unleash small-arms and rocket fire on coalition troops below. A voice dubbed over the video says that the coalition soldiers then try to regroup at a location where a helicopter could rescue them.

A bright flash bursts on the screen, a “precision bomb” that the narrator says killed two of the militants on the Pakistani side of the border. But, the voice adds, “it is clear that there are no military structures or outposts in the area.”

At least three more bombs explode, killing the remaining militants, the narrator says. The video does not account for other bombs that U.S. military officials acknowledge were dropped in the area.

Speaking to reporters traveling with President Bush in Europe, national security advisor Stephen Hadley said U.S. officials had “not been able to corroborate” the Pakistani charges about the airstrike.

“One of the problems is that it is still not exactly clear what happened,” Hadley said, according to the Associated Press. “The reports, quite frankly, even from sources within the United States, are conflicting.”

Either way, the world got a little murkier and the disconnect between the world of diplomacy and the “facts on the ground” was proven yet again. The implications are aptly hinted in this interview –

“Every indication we have at this point is that the actions that were taken by US forces were legitimate in that they were in self-defense after US forces operating on the border of Pakistan in Afghanistan territory came under attack from hostile forces and, in self-defense, they called in an air strike which took out those forces that were attacking them,” the spokesman, Geoff Morell, said Asked if the Pakistani troops had been firing at the US forces which would back up their case that it was legitimate self-defence, Morell said: “Well, this is a little bit of a slippery slope, because I don’t want to get into the particulars of what the 101st is releasing… But clearly… our forces came under attack, came under fire, from forces that had come over from the Pakistani side, into Afghan territory, and then retreated into Pakistani territory and continued to fire upon our forces, even though we did not pursue them into Pakistan.”

The situation poses a number of strategic dilemmas for the US. US-led forces may have to assume the security responsibility for an area that Pakistan has effectively abandoned to the Taliban while simultaneously being pummeled by the “outrage” of same Pakistani politicians who abdicated it in the first place. In the worst case Pakistan will demand all the dignities of sovereignty over an area for which they will assume no meaningful control. At the same time, the US must respond to this situation without wholly alienating Pakistan through which the bulk of US supplies pass.