Continuing my suddenly service-y news coverage this the week, I bring you the most fascinating case of corruption gone awry yet! Former Bangladeshi Prime Minister Sheikh Hasina is currently under trial, facing at least 10 counts of extortion and misuse of power. Legal proceedings just hit a snag when documents pertaining to a “barge-mounted power plant graft case” were found eaten by termites. 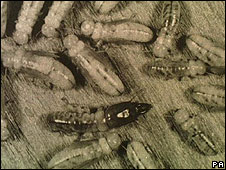 According to her lawyers:

…many of the documents were now unreadable. The insect-eaten files were produced in court so that the matter could be officially recorded by the judge.

The defence say their case has been ruined. link

But wait! All is not so cut-and-dry (or, uh, chewed-and-digested):

The prosecution argued that only a tiny part of the cover page of the file was destroyed by termites.

They demanded to know whether the file had been damaged deliberately or because of negligence. link

Termites. Termites! Wow…think of how history might have changed if Monica had introduced a few boll weevils to that blue dress.

I wonder if I can get away with not paying rent this month… the mice ate my checkbook.

8 thoughts on “The Termites Ate My Papers!!”