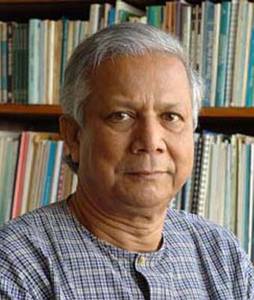 SINCE CompartamosBanco, a Mexican lender to the poor, went public a year or so ago, a rift has been growing in the booming microfinance industry. To supporters of traditional charitable microfinance–providing loans and other financial services to help lift people out of extreme poverty–the Compartamos initial public offering has come to symbolise an aggressive move by capitalists to profit from the poor. To its backers, on the other hand, the success of Compartamos, despite the recent lacklustre performance of its shares, symbolises how the profit motive can help lift many more people out of poverty than charity alone could ever do.

In an earlier Sepia Mutiny piece, I noted that while nearly all parties heap praise on the specific mechanisms of microcredit, there is some interesting dissonance around the narrative and goals of the system –

While I’m a huge fan of microloans in general, I fear that for many, the lesson drawn is that micro-loans somehow subvert “traditional” capitalism (whatever that may be). It’s a flame that Yunus certainly fans and that many, but clearly not all, boosters latch onto…instead of reenginering capitalism to help the poor, microloans are far more profoundly reengineering charity to help the poor help themselves. Why point out this seemingly semantic difference? It’s about identifying the long term goal and the moral high ground…. Microloans are ideally a new on-ramp helping these individuals participate in the virtues of Global Capitalism (and eventually graduate into traditional banking) rather than some sort of bypass.

And sure enough, the High Priest of Microloans, Mohammed Yunus, is one such critic who seeks the “bypass from capitalism”….

In a different interview, he flatly excommunicates Compartamos from the microcredit church –

Yunus, 67, says he fears that his innovation has been twisted to benefit investors, rather than the poor. But he has particularly unforgiving words for microlender Compartamos. At one point during a conversation, Yunus objected to the mention of Compartamos and microfinance in the same sentence.”When you discuss microcredit, don’t bring Compartamos into it,” he instructed. “Microcredit was created to fight the money lender, not to become the money lender.”

Objective criticism of Compartamos focuses on the high interest rates charged to the poor.

..it is charging interest rates of over 100% a year, little different from what illegal loan sharks demand, and that it is deliberately making it difficult for poor borrowers to understand how much they are paying for their loans.

Just to be clear, deliberately hiding info from poor borrowers is potentially outright fraud and should certainly be prosecuted through normal means if the accusation is, in fact true. (although I suspect, that much of the activity being blamed here is likely to fall into the “shady” category rather than “illegal” — much like the fine print “gotcha’s” on just about any contract.)

But on the subject of interest rates, much of the problem directly stems from limited scale of the operations involved; Kiva’s website provides an explanation for why microloans charge much higher interest than typical banks –

The nature of microcredit – small loans – is such that interest rates need to be high to return the cost of the loan.

…To break even on the $100 loan, the MFI would need to collect interest of $10 + 1 + $25 = $36, which is an interest rate of 36%. At first glance, a rate this high looks abusive to many people, especially when the clients are poor. But in fact, this interest rate simply reflects the basic reality that when loan sizes get very small, transaction costs loom larger because these costs can’t be cut below certain minimums.

Compartamos’ rates are obviously much higher than even this example from Kiva. However, Capitalism 101 provides much of justification for Compartamos — profits are necessary for a firm to scale up successful operations and, from an economy-wide perspective, they invite competition & bring in new entrants to the market –

…Compartamos concedes that its rates may seem high–though it reckons they are closer to 70%–but says they are set to allow the bank to grow quickly to meet vast untapped demand in Mexico. Its borrowers have risen in number from 60,000 to around 900,000 in the past eight years. This is hardly an indication of exploited customers.

…A “big win” like the Compartamos IPO was needed to attract lots more capital into the microfinance industry, says Ãlvaro RodrÃ­guez Arregui, the chairman of ACCION International, a charity that has been helping to spread microfinance since the 1970s.

…For-profit microfinance has been growing fast, including in India where SKS, a lender created by Vikram Akula, a former McKinsey partner, is backed by Sequoia, a leading Silicon Valley venture-capital firm.

Or, as the co-CEOs of Compartamos put it -

Mr. Danel and Mr. Labarthe say microfinance will help more poor people by tapping the boundless pool of investor capital rather than the limited pool of donor money.

…Mr. Danel and Mr. Labarthe argue that successful microlenders in a middle-income country like Mexico should use the capital markets, instead of crowding out donations.

As part of their defense, they argue that Compartamos’s success has prompted a number of institutions, including traditional banks and retailers, to start offering financial products to the poor.

However the real rift, I’d argue, isn’t over the operational details of how much interest should be charged (an impossibly difficult question to really answer outside of the market) but rather, around microfinance’s relationship with & the virtues of capitalism. Should microfinance be an escape from it or the on ramp to it?

11 thoughts on “A Rift in Microloan-World”