Is it really possible to bottle the scent of a place? The House of HermÃ¨s is trying to do just that — capture the scents of the southern Indian state of Kerala with its new fragrance “Un Jardin AprÃ¨s la Mousson” (A Garden After the Monsoon). 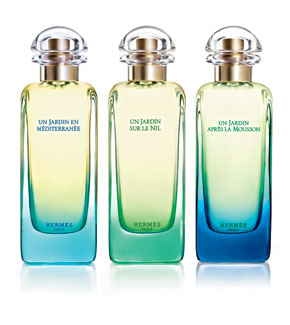 The result, after 300 drafts, according to “Liquid Assets” by Phoebe Eaton in the current NYT Travel Summer 2008 magazine is a perfume that is “confected with vetiver and kahili ginger, which isnâ€™t a ginger at all but a white flower that gusts like a rogue hybrid of jasmine, tuberose and gardenia.”

I really enjoyed reading about the process of developing this perfume — the trials and experiments that Jean-Claude Ellen has undergone as he has struggled to “bottle the fantasy” of … well, let’s just scream it, EXOTIC KERALA! India is hot in the House of HermÃ¨s, apparently. Its the theme for 2008 and and “silk scarves are vivid with raw pinks and fleshy mangoes, elephants harnessed to carriages and tigers rampant.” For a bit more on the exotic front, take this passage, which describes the arrival of monsoon. It had me, well, basically flummoxed:

In coastal Kerala, spices have been trafficked since the Romans rode in on the winds of the monsoons seeking cardamom and pepper: black gold. Women wear their saris differently here than they do up north, draping them like togas. And when the first monsoon blows in from the Arabian Sea â€” and it always seems to arrive during the first week of June, extinguishing the scorching rays of the summer sun and ushering in a joyful verdant renewal â€” the modest women of Kerala rush out into the rain, â€˜â€˜and the saris cling close to the body. Very Ã©rotique,â€™â€™ says Ellena. Bollywood films often feature bosomy romantics carelessly cavorting through such torrential downpours in scenes designed to thwart the censors. For this same reason, Muslim boys are not allowed out of the house during the first week of the monsoon.

Umm, is this really true? I feel like I need some fact checkers to either set the record straight or enlighten me.

And, I can’t resist asking: If there was any scent you’d want to bottle, what would it be? I love the experiences that Christopher Brosius of CB Perfume has transformed into perfumes:

A Memory of Kindness: The shining green scent of tomato vines growing in the fresh earth of a country garden

Experience in the Library: English Novel taken from a Signed First Edition of one of my very favorite novels, Russian & Moroccan leather bindings, worn cloth and a hint of wood polish

In the Summer Kitchen: Fresh garden vegetables & herbs on a clear summer evening with a touch of smoked old wooden rafters

33 thoughts on “Inhale to visit a “Garden After the Monsoon””