Last week the nation lost Michael Vinay Bhatia to the war in Afghanistan (an IED of course). To say he was a unique breed of “soldier” would be an understatement: 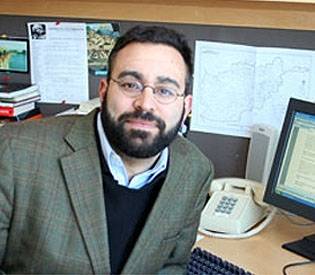 Michael Vinay Bhatia, 31, was serving as a social scientist embedded with troops in the U.S. Army’s Human Terrain Systems program.

HTS program manager Steve Fondacaro said, “He was an example of a brilliant scholar who could have made his job and done well in the U.S., but who of his own accord discovered our program and volunteered to participate as a team member fully understanding the risks. This makes him a hero three, four times over…”

Bhatia’s dream of making a difference also took him to war-torn East Timor. But friends said they believed Bhatia was looking forward to a peaceful life back home. “I got the sense this was the last hurrah for him,” Havens said. “He was building his nest egg and looking for academic positions in the States for when he came back…” [Link]

p>I first heard about the Human Terrain Systems Program in an NPR story a few months ago (worth listening to). The idea is quite brilliant, the type of idea that our disastrous wars in Afghanistan and Iraq could use more of if we want to see a real turn around. The basic purpose of the HTS teams is to learn about the people and customs of a region so that they can advise the military on how to win hearts and minds, not through bluster, but through mutual understanding:

p>Among the outpouring of grief and remembrance that arose on various blogs in the past week was this one by a classmate of Bhatia’s at Brown University:

“I wish to pass on some bad news: Michael Bhatia was killed in Afghanistan.”

For twenty minutes, I managed to push it out of my mind and finish my meeting. As soon as I left The Landing, I fell apart.

As the day went on, I talked to other friends and colleagues of Mike’s and gathered more information. Apparently Mike was killed by a roadside bomb in Khost. He was stationed at FOB Salerno and advising the 82nd Airborne Division as part of the Human Terrain program. It was a controversial program and Mike told me he faced some criticism from colleagues for his decision to participate, but ultimately he believed he could do some good.

Mike and I were classmates at Brown, but we didn’t know each other well then. He came back to Providence in 2006 to become a visiting professor at the Watson Institute at Brown and we reconnected. If you google Mike, you’ll read a lot about his scholarly work around the world, especially in Afghanistan. Mike was a true academic, but in many ways he was more like Indiana Jones. Mike didn’t sit around and do research. He spent his time in the field: in Kosovo, East Timor, Afghanistan and more. Mike was a genius. He was an Oxford scholar, his book The Gun in Afghanistan was just published and there’s no doubt he knew his stuff when it came to international relations. You can find academics and experts around the globe who will sing his praises. They can do a far better job than I can explaining exactly why Mike’s research was so important.

I knew Mike in a far different capacity. To me, he wasn’t an author or a professor or a scholar. To me, he was a friend. For about a year Mike and I hung out on an almost daily basis. Last summer, Mike would come over to my place and we’d drink scotch and play Halo 2 until three in the morning (he’d routinely kick my ass). I would listen to him complain about his job and he’d endure my endless moaning about the trials and tribulations of starting a new company. We would go to the Wickenden Pub with our friend Chris and debate religion or head to the Wild Colonial to commiserate about women. We watched Entourage and Firefly together. Mike was a guy’s guy, a partner in crime. The kind that you could call any day of the week and he’d be down to go out at a moment’s notice. [Link]

p>Coincidentally, the author of the blog entry above was one of my closest friends growing up.

p>The best way to understand Bhatia’s work, and the reason why people are mourning the loss of his intelligence as well as his friendship, is to read this photoessay of his published last year.

p>Another one of his friends wrote in to SM as well:

A scholarship fund was established in Michael’s memory. The purpose of the fund will be to provide opportunities for undergraduates to obtain experiences working abroad similar to those Michael was able to undertake. Although the precise contours of the scholarship will be developed in the coming months, a fund already exists in his name. Those who would like to contribute to this fund may do so by writing checks payable to Brown University, clearly indicating that the gift is in memory of Michael Bhatia, and mailing the contribution to the following address: