As I mentioned last week, Louisiana Governor Bobby Jindal will be on Leno tonight in a show he taped earlier. If Leno is on past your bedtime then you can read the full transcript here: 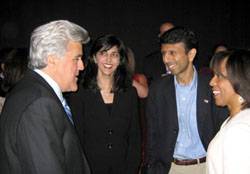 Leno: So, tell us Bobby. If John McCain came asking or begging you to be vice president, you’re telling us you will say “no”.

Jindal: Jay, again, I would be honored but I have a job to do and that is to be the governor of all of the people in Louisiana, republicans and democrats, rich and poor, young and old.

Leno: Spoken like a politician Bobby. You are learning fast. But, getting back to the question. Would you say absolutely say I would not serve as Vice President if asked. Remember you would be a heart beat away from the Oval Office and McCain is no “spring chicken”. Are you telling the nation tonight you would not serve no matter what?

Jindal: Jay, I have a job to do. I was voted into office by a large majority. I want to be the best Governor Louisiana has ever had and we have really had some real colorful clowns in the past.

Leno: So, that is the best we will get from you tonight, right.

Jindal: I have spoken repeatedly about this issue explaining my feelings, so let’s talk about how Louisiana is becoming a major force to be reckoned now and in the future.

Leno: Governor, first, I’ve been wondering. Tell me. How did an Indian American become Governor of the same state that almost put David Duke in the mansion a decade or so ago? Did you buy his list or something?

Jindal: (laughs) Well, Louisiana has changed so much in the past decade and will do so even more during my administration. I am pleased that the son of an Indian immigrant could become Governor in the Deep South. I was born in Baton Rouge, am an American and am dedicated to turning Louisiana around after years of neglect and poor leadership. [Link]

I have to say, he is saying all the words a person who’d accept and invitation to be VP should be saying. I don’t think you’d HAVE to resign your Governor’s job to be a Vice Presidential running mate. I guess it is in his advantage to keep his name in the spotlight by not dismissing the idea. I’ll link the video once its up.