I’m in the midst of biz trip hell and one book I’m plowing through is Thomas Sowell‘s Conquests & Cultures. The book is part of a trilogy where Sowell brings his considerable scholarship to the relationship between culture and socio-economic outcomes across a wide span of history & the globe. 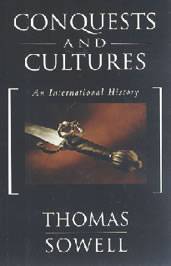 This is a mighty controversial topic, to say the least, and one which Sowell engages with aplomb.

Clearly, one factor which has shaped the fate of groups over time is, of course, Conquest. And Sowell isn’t afraid to discuss how this dynamic played out for both Worse *and* for Better.

Now, we need to be very clear that by pointing out the Better, Sowell is emphatically NOT making a case for future Conquests of Cultures. Nor is he delving into whether Conquests are / were Morally Good. And, for that matter neither am I (just to forestall some of the comments a post like this generates – let’s try to keep the discussion Type C rather than descend into Type M. One can credit how the K-T extinction helped give rise to Humanity, for example, without calling it Good or “wishing” for another one; same with the British Empire).

What he is noting, however, is that just as many of the leaps and bounds of progress in tech can be traced to conflict & competition (WWII and the Space Race, to pick a few quickie examples), cultures are similarly fluid and subject to evolution. Proof of this & a tremendous source of historical experiments to this effect is Conquest [pg ix]-

The underlying theme of all these books is that racial, ethnic, and national groups have their own respective cultures without which their economic and social histories cannot be understood. Modest as this claim may seem, it collides head-on with the more widely accepted visions in which the fates of minority groups are determined by “society” around them, which society is therefore both causally and morally responsible for the misfortunes peculiar to the less fortunate of these groups — though apparently not responsible for the good fortune of more successful minority groups. This trilogy also collides head-on with prevailing doctrines about “celebrating” and preserving cultral differences. Cultures are not museum-pieces. They are the working machinery of everday life. Unlike objects of aesthetic contemplation, working machinery is judged by how well it works, compared to the alternatives.

In other words –> Culture is a moving target & is responsible for much of our socio-economic fate(s). One source of Punctuated Equilibrium in Culture’s evolution is/was Conquest. Let’s learn how it got us to where we are today & use those lessons + our volition to further evolve moving forward…

Sowell shares much material with Jared Diamond’s Guns, Germs and Steel (for ex., lack of load-bearing animals in Western Hemisphere = less food per acreage = smaller towns and less disease resistence = easy conquest by the Spanish). But, he goes leaps beyond by explicitly adding the variables of culture and conquest to more satisfyingly address Diamond’s core question of why some are rich and some are poor.

Although India would seem to figure prominently in any such broad, empirical assessment, this particular work from Sowell unfortunately doesn’t spend much time there (I’m a fan of his work and some of his other books do, in fact, cover India pretty well). He does provide an example or 2 which we’ll get to in a second.

Instead the book focuses on 4 case studies in depth -

Still, Sowell does pepper the book with a few anecdotes pertinent to India. One set tracks the fascinating tale of Peter the Great’s desire to tap desi mercantile skills for Slavic prosperity via the markets of Astrakhan (this link is fascinating read, BTW).

Desis in Africa weren’t conquerers in the military sense (they road the Brit’s coattails). However, many natives didn’t so readily separate the political and commercial and viewed Indians with much of the same scorn. Gujuratis in particular rather successfully surfed the (comparative) Free Trade Zone that was the British Empire and played a massive role in E. Africa’s economic picture [pg 136] –

This particular snippet, early in the book, is one I thought Mutineers might be able to fact check (and it’s the one that, a couple hours ago, started this long, rambling blog post

Among the millions of Telugu-speaking people in eastern India during the colonial era, some lived under the direct rule of the British conquerors while others lived under Indian princes. When these peoples were united, years after India’s independence, into a newly created state of Andhra Pradesh, the Andhras who had lived under British rule proved to be overwhelming competition for the Telanganans who had lived under Indian princes. Andhras not only bested the Telanaganans on civil service examinations, taking over great numbers of government jobs as a result, but also outperformed them in agriculture, where they were able to buy out Telanganan farmers and make their farms much more productive and more profitable.

Sowell’s 100 pages of footnotes reveals the source of the factoid as Myron Weiner’s Sons of the Soil published in 1978. Anyone got more deets? Any of our Telugu-speaking readers know to what extent this was the cause of differences between “Andhras” and “Telanaganans“? Are there similar anecdotes in India between closely related but differently “Brit-ized” groups within the Desh?

60 thoughts on “Conquest, Culture, and India”