Sepiaâ€™s very own guest columnist V. V. Ganeshananthanâ€™s debut novel “Love Marriage” [book excerpt] is a haunting family drama about the ramifications of decades of civil war in Sri Lanka. [Cicatrix's review is forthcoming.] It hit bookshelves earlier this month, and while on her book tour, Sugi took a few minutes to answer some questions via e-mail about the book, her writing process, and her inspirations.

You began Love Marriage as your senior thesis, I’ve read. Was there a particular image or incident that inspired it, apart, of course, from your own background as the child of Sri Lankan immigrants? No single thing inspired the book. The first 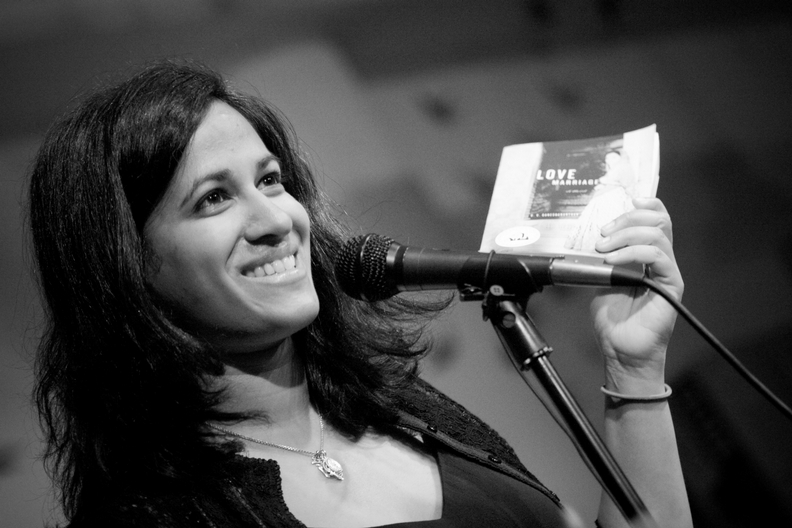 page seemed to write itself, almost by accident. They were just some musings, but then I took them into a creative writing class, and my classmates were very encouraging about it and wanted to hear more from that voice. That voice belonged to a particular character who was starting to realize how Sri Lankan politics had affectedâ€”and continued to affectâ€”her family. And therefore her.

Why did you choose to write the novel in these vignettes? Did this form help you accomplish something that a straight narrative could not? The currency of family stories is the anecdote. This is the manner in which most of learn about our families, so in that way it is organic to the story.

Time is dealt with in interesting ways in Love Marriage . There are two sections in the novel that I thought were especially powerful where you describe simultaneous events – they are almost cinematic. For example, while the main character Yalini is being born, Black July is happening in Sri Lanka. Can you address the question of parallels? There are lots of parallels in the book. Some were quite intentional, and others were not. I hadn’t really thought of the birth scene as a parallel until you mentioned it, but I suppose it is. I think of it as the one moment when Murali is in two places at once. Here is this young Sri Lankan couple having their first child, and it’s supposed to be this joyous moment. And it is. And yet at the same time Murali has this singular experience of watching disaster at home through the lens of the news. He is watching it and he is not part of it. There’s the distance of the eye of the camera. And at the same time he is a part of it in two weird ways: He is part of a removed group of viewers, and he can also imagine himself on the screen. He’s powerless, except for the act of viewing and knowing that.

When I first heard the title of the book, I have to admit that I thought, “Oh, no, another book about love vs. arranged marriages” – but that presumption was very quickly blown away. At the end of the novel, we come to see the notion of marriage as many different things, between people but also between “person and a country.” In light of current political climate, was there a political statement that you wanted to make with this novel? Of course the book is political. It has a range of characters with a range of political opinions. The Sri Lankan diaspora’s political views are sometimes understood as two opposite poles with nothing in between. (As though arranged marriage and love marriage were the only two kinds of marriage.) But there are so many communities and opinions and conversations out there. It’s important to create room for dissent in any dialogueâ€”and this one in particular. Yalini spends much of the novel digging up her family history. In this way, she reminded me very much of myself, always trying to find out my family’s stories – so many of which are buried deep. There are talkers and there are people like Yalini’s mother, who tells about herself by talking about other people. I take it that you conducted many interviews for this book. Was it difficult to get people talking about their painful memories? It depended on the person and their personal situation, but most people were very open about it. If I had been doing something journalistic, perhaps that might have been more difficult.

Your training as a journalist is evident in the meticulously researched novel, which was written without your having visited Sri Lanka more than twice in your lifetime. Did you go there while writing the book? What were the special challenges of writing about a historical event from a distance? I did go there twice while writing the book. Of course, many novels include historical events at which the author was not present. I interviewed people and read a lot of books and had to deal with competing narratives of what had happened. And that’s something I’ve dealt with as both a journalist and a member of a family: competing narratives. I wanted to acknowledge that, and the existence of multiple stories. I was fortunate that I was at the University of Iowa for part of the time while I was working on this book, and on my second novel. I was surprised when I went to the library in Iowa to find that they actually had a lot of books on Sri Lanka. If my memory is correct, there were about a thousand books. So I did a lot of reading.

Writers always want to know: what was your process in writing this book? Did you do it from start to finish? Did you do it in spurts? Did you write a first draft then go back and rewrite it? Tell us about discipline. I wrote in spurts and yes, mostly from start to finish. A few pieces here and there moved around, and some large chunks were cut; the first draft, that I turned in as my senior thesis at Harvard, was about 140 pages, and the uncle character wasn’t in it! I wrote through it a couple of more times after that, and of course, the uncle character appeared and I found him very interesting. Which each draft he became more of a presence.

I tend to write when I feel like. I write in bed. I was teaching this weekend in Chicago, where Mary Anne and DesiLit were my hosts, and Mary Anne was talking about writing in cafes. I know a lot of writers who like to do that, but I don’t generally write fiction in the presence of others. I have to be alone. I also really like writing in bed. It makes for easy transitions between writing and naps. Very important, especially as things percolate when you sleep.

Tell me about the authors you most admire, the ones who have served as a model for your fiction and creative work. Many of my teachers are also my creative models. I started writing Love Marriage as a student of Jamaica Kincaid’s. She is extremely meticulous and precise. When I was a senior in college she spent a lot of time with me, not just editing Love Marriage, but teaching me how to edit Love Marriage. It was an incredible lesson.

At the University of Iowa, I studied with the late Frank Conroy, who was the director of the Workshop; I have also been particularly fortunate to work with Elizabeth McCracken and James McPherson, among other generous permanent and visiting faculty members there. More established writers have in general been very kind to me. And of course I am a longtime fan of Sri Lankan writers in English, including Bodies in Motion author Mary Anne Mohanrajâ€”whose family and mine have known each other for a long time; Shyam Selvadurai, who wrote Funny Boy, which I still reread all the time; Michael Ondaatje, whose body of work is so compelling; A. Sivanandan, whose book When Memory Dies is wonderful; Romesh Gunasekara, whose book The Match has just been published in the U.S.; and other writers. There are also wonderful Sri Lankan poets and spoken word artists (Leah Lakshmi Piepzna-Samarasinha and D’lo are both terrific, as is Marian Yalini Thambynayagam). I’m always especially eager to meet other Sri Lankan diaspora writers and artists.

Are you working on your next novel right now? Yes, I am a couple of hundred pages into another novel about Sri Lanka. In North America, Random House has already agreed to publish it. I’m really excited about it, but because things change so much, I’m going to be oblique about it until it is closer to a final form. I will say that it is very different from Love Marriage.

Journalism and fiction. One is based on facts. One is about going into your imagination. You do both. Why? They really do feed each other, at least for me. (I’m very grateful to my mother in particular for insisting that since I was so interested in English, I ought to join my high school newspaper.) I always knew I wanted to write fiction, but I never expected my journalism skills to be so helpful. My interest in fiction and imagination helps me to empathize with people I interview as a journalist. Journalism has given me an appreciation for speed and deadlines. More importantly, my career as a reporter has taught me the importance of logic and facts, as well as how to research. (Each piece of fiction, after all, must have internal logic.)

10 thoughts on “Q&A with V.V. Ganeshananthan, author of â€œLove Marriageâ€”