One of the things I miss most about living in Los Angeles is the IFFLA that takes place at the ArcLight in Hollywood every April. There was just something cool about being one of the first desi kids on the block to be able to see some smart films that are typically overshadowed by the usual Bollywood fare. Granted, there are a few flops but for the most part you can be pretty sure that you will walk away satisfied at having seen one or two memorable flicks. This year’s film festival is THIS WEEK, April 22nd to 27th.

As I pursued the line-up I noticed a few films I’d really like to check out if I was still there. The first one reminds me of my childhood vacation in Ahmedabad where I became a feared kite-killer over the course of several months, Under The Ahmedabad Sky. Eventually, my own kite, with dozens of confirmed kills, went down. I learned an important lesson that day. No matter how bad, powerful, or smart I am, there will be someone “more badder” to eventually take me down:

Another film that caught my eye is titled “The Pool.” It won a special jury prize at Sundance last year:

Venkatesh works as a bell-boy (attendant) in one of Goa’s budget hotels. On his way to work everyday with his friend Jhangir, he peeps over the wall of an empty house, staring at the swimming pool and proudly declaring his aspiration to break in and take a swim. Venkatesh’s dream is short-lived as the owners return. The mysterious and dysfunctional relationship between the homeowner and his daughter peaks Venkatesh’s curiosity as he gradually moves closer to them, finding a job as a gardener on the premises. [Link]

p>A documentary about the partition called The Sky Below also looks interesting. The film-maker Sarah Singh has a blog where she details some of her encounters with the films subjects. I read some of her posts with fascination:

The 1947 Partition of the Northwest region of the Subcontinent ushered in swift and devastating violence for which the aftershocks are still being felt today. The peoples of Pakistan and India while sharing a common culture and history have yet to speak candidly about this volatile period in recent history that divided a nation. Filmmaker Sarah Singh thoroughly explores the personal impact of Partition through first hand accounts by people of many faiths, geographical regions and walks of life that shed new light on the complexities of Partition and its far-reaching impact. [Link]

p>Finally I found this trailer to a film called The Morning Ritual kind of cute. We all have morning rituals, not like this though: 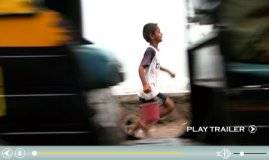 If some of you are able to make it out to the festival, let us know which ones you liked.