Ricardo Cortes and F. Bowman Hastie, the authors of childrenâ€™s coloring book, I Donâ€™t Want to Blow You Up, were sitting on a pier along the Hudson River last summer, with their buddy Naeem, when they came up with the idea for their recently published childrenâ€™s book which has been receiving a fair amount of attention (good and bad). 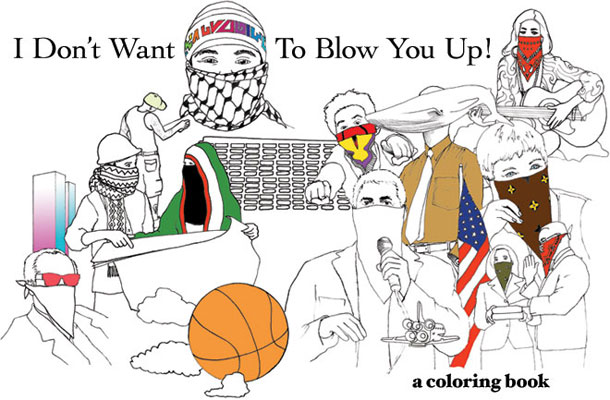 WHAT? A coloring book for kids and adults. [preview the book]

WHO? In an age of yellow, orange, and red terror alerts, the book draws attention to the myriad people of different colors and cultures who are living peaceful and meaningful lives. It’s narrated by Naeem, a political artist. (“Hello, my name is Naeem. I was born in London. I grew up in Pakistan, Libya, and Bangladesh. Now I live in Brooklyn, New York. I blow up tires on my bicycle, but I don’t want to blow you up. Now let’s go meet some people …)

WHY? To counter the terrifying messages transmitted in the name of the â€œWar on Terror.â€

WHEN? In a post 9/11 society. In the words of the authors, â€œWe really just wanted to so SOMETHING to try to temper the terror hysteria that has gripped this country, and especially New York, since 9/11. We also wanted to address the epidemic of identity profiling that affects not just Muslims and Arabs, but an entire suspect community that has developed based on people’s appearance, name, country of origin, or faith.â€

WHERE? At the airport, on the subway, in a shopping mall, on the school playground, in New York City, in the United States of America, in the world.

HOW? There are children in the U.S. and other western countries who are taunted as â€œterroristsâ€ and â€œosama bin ladinâ€ simply because they look Middle Eastern or have an Arabic name. It is the authorsâ€™ hope that kids might feel empowered when reading the stories of other inspiring and impressive people like themselves. At the same time, the children out there who have been enlisted into perpetuating the terror myth might gain some new perspective by seeing some of their heroes in a different light, or by discovering new heroes in unexpected places.

I just finished writing a reading guide for parents and educators for this book [available for free online here], which the authors envision â€œas a tool for addressing a difficult and sensitive topic of discussion with kids who have already indicated some degree of concern or fear themselves, or who have had the experience of being the â€œsuspect.â€

That’s something all to familiar to many of us, I’d venture to guess. For as long as I could remember, throughout my childhood, my father had a beard. Then one day, around 1990, I woke up and came down for breakfast, and there was Papa, eating his cereal, completely clean-shaven, not a trace of hair on his face, for the first time in my life. “Oh no, Papa, why did you do it?!” I exclaimed. “You don’t look like yourself anymore.” My dad smiled in resignation. A frequent flyer and business traveler to London at a time when a fatwa was still being held over the head of Salman Rushdie, he was frequently stopped by complete strangers who commented on their â€œuncanny resemblanceâ€ or mistook him for Rushdie. Once, on a London street, he was even stopped by a gushing woman. â€œOh, Mr. Rushdie, Iâ€™m so happy to meet you. Donâ€™t worry, I wonâ€™t say a thing to anyone!â€ she exclaimed, and took off before he could even get a word in edgewise. On a certain level, I think my dad was sometimes afraid that his resemblance to Rushdie would make him the target of violence. At the same time, as a relatively new immigrant in the United States in the 1980s, the vilification of the Middle East was already on the upswing, especially following the Panam 103 terrorist attack.

I was always proud of the fact that my dad looked like Salman Rushdie â€“ though personally, I did think he was more handsome!â€”but looking back, I can see why and how this was disconcerting to him. In a way, his situation was not that different from the many South Asian men who, after 9/11, have wondered whether they should shave their facial hair to avoid any resemblance to the pictured terrorists. (My father ended up switching to a goatee to appease all of us, but because he passed away in 2001, so I will never know how he would have reacted to the post 9/11 hysteria.)

Personally, I can see this book being used as a tool for promoting tolerance and discussing post 9/11 reactions to terrorism, both by children and adults.