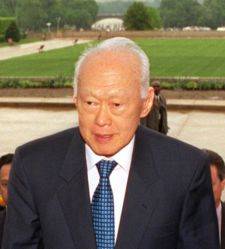 Lee tackles several topics that should be of interest to mutineers, starting with his long term prognosis for India –

India’s economy can grow to about 60-70 percent that of China. I see that as the long-term trend. They’re not going to be bigger than China – on present projections.

But 60-70 percent of China with a population which will be bigger than China by 2050, is something considerable, and they’ve some very able people at the top. I draw this historical lesson which I believe will be repeated, though not in exactly the same way, but will manifest itself in a similar pattern.

Given India’s current real, per-capita GDP of $1000 vs. China’s $2800, and an overall GDP of $1T vs. China’s $2.8T, Lee is projecting some pretty rapid gap closing by India. Still, it’s interesting that he doesn’t think it will close the gap completely and he certainly doesn’t see India overtaking China anytime soon.

Other parts of Lee’s interview dive rather directly into the Liberalism vs. Capitalism vs. Democracy question that’s got some mutineers riled up…

Lee asserts that a big part of Singapore’s success came from explicitly eschewing the identity politics that dominates political discourse in so many other, similarly heterogenous countries –

To begin with we don’t have the ingredients of a nation, the elementary factors, a homogenous population, common language, common culture and common destiny.

We are migrants from southern China, southern India, Pakistan, Bangladesh, before it was divided, Ceylon and the archipelago. So, the problem was, can we keep these peoples together?

The basis of a nation just was not there. But the advantage we had was that we became independent late. In 1965, we had 20 years of examples of failed states. So, we knew what to avoid – racial conflict, linguistic strife, religious conflict. We saw Ceylon.

Thereafter, we knew that if we embarked on any of these romantic ideas, to revive a mythical past of greatness and culture, we’d be damned. So, there’s no return to nativism.

Similarly, many folks are aware of how explicitly social / cultural engineering created the backbone of Singaporean society. Lee goes into a little detail on it here –

Lee Kuan Yew: …Take this matter of getting MNCs [multinational corporations] to come here when the developing world expert economists said, “No, MNCs are exploiters.” [back in the 1960s]

I went to America. This was a happenstance . . . What were the Americans doing? They were exporting their manufacturing capabilities . . . That’s what I wanted. That’s how it started.

I said O.K., let’s make this a first world oasis in a third world region. So not only will they come here to set up plants and manufacture, they will also come here and from here explore the region.

What do we need to attract them? First class infrastructure. Where do we get it from? We had the savings from our Central Provident Fund. We had some loans from the World Bank.

We built up the infrastructure. The difficult part was getting the people to change their habits so that they behaved more like first world citizens, not like third world citizens spitting and littering all over the place.

I’d contend that the “spitting and literring” is a convenient talking point & merely the tip of a larger, cultural iceberg. The real issue – and what really made Singapore such an oasis in the 3rd world – was the entire basket of “1st world” attitudes & behaviors, particularly towards commerce and corruption. Singapore free-traded before it was cool. And Singapore’s corruption index is positively Nordic – a triumph given its neighborhood.

Given corruption’s significant cultural basis, stamping it out can require particularly aggressive policing – something Singapore is pretty well known for

IHT: But won’t that require a greater opening up of society here? A loosening of the press, of free speech, of political competition?

Lee Kuan Yew: I’m giving you the answer of a pragmatist.

IHT: That’s what I want to hear.

p>Put simply, from Lee’s perspective, many aspects of our polity are first predicated on Western, Classical Liberal culture. Still, he’s quick to recognize a certain long term inevitability of these ideals and notes the life led by the country’s newly minted upper crust -

So, they know the wide world and they are on the Internet and they’ve got friends, they e-mail them. They travel. Every year, about 50 percent of Singaporeans travel by air.

So, this is not a closed society. But at the same time, we try to maintain a certain balance with the people who are not finding it so comfortable to suddenly find the world changed, their world, their sense of place, their sense of position in society.

And he’s got a similar prognosis for Gay Issues in the country; “don’t ask, don’t tell” for now (recognizing sizable Muslim minorities in the country, for ex.), but more in the future. So, regardless of where you sit on the classic “Western” political spectrum there’s much to admire as well as be uneasy about when it comes to Singapore’s unique situation. Lee tosses these categories away and simply characterizes his politics as “pragmatic.”