Recently, I’ve read three articles by brown doctors (Darshak Sanghavi, Atul Gawande, and Sandeep Jauhar) all of which claim that there is something systematically wrong with the practice of medicine today. All three argue that we pay too much and get too little; Gawande goes the furthest by claiming that doctors and nurses routinely fail perform simple tasks they claim to be carrying out, thus endangering lives [Thanks Rahul]. 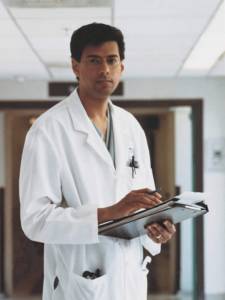 Jauhar argues that poor incentives lead to gigantic amounts of waste in almost all medical practices:

In our health care system, where doctors are paid piecework for their services … overuse of services in health care probably cost hundreds of billions of dollars last year

Are we getting our money’s worth? Not according to the usual measures of public health. The United States ranks 45th in life expectancy, behind Bosnia and Jordan; near last, compared with other developed countries, in infant mortality; and in last place … among major industrialized countries in health-care quality, access and efficiency. [Link]

The other two go deeper than just the reimbursement system. They argue that doctors are not doing the routine tasks of their profession well, which reduces the quality of health care across the board and even kills patients:

… a team of researchers … reviewed children’s medical records from 12 major American cities and found that fewer than half of children got the correct medical care during doctor visits…A similar study of adult quality of care was published in 2003 with similar results. [Link]

While Sanghavi blames medical training that emphasizes diagnosis over execution, Gawande argues that medicine has become too complex for doctors to remember to do all of the simple things they need without some form of codification:

A large body of evidence gathered in recent years has revealed a profound failure by health-care professionals to follow basic steps proven to stop infection and other major complications. We now know that hundreds of thousands of Americans suffer serious complications or die as a result. It’s not for lack of effort. People in health care … are struggling … to provide increasingly complex care in the absence of effective systematization. [Link]

p>To address this, Gawande supports greater use of the humble checklist, an activity that makes airplanes safe to fly. One ICU checklist, listing five simple steps that all doctors are supposed to know and follow already, quickly saved money, suffering and lives:

Doctors are supposed to (1) wash their hands with soap, (2) clean the patient’s skin with chlorhexidine antiseptic, (3) put sterile drapes over the entire patient, (4) wear a sterile mask, hat, gown, and gloves, and (5) put a sterile dressing over the catheter site once the line is in….These steps are no-brainers; they have been known and taught for years… in this one hospital, the checklist had prevented forty-three infections and eight deaths, and saved two million dollars in costs. [Link]

p>In Michigan, where the same checklist was implemented on a broader basis, the results were even more profound:

Within three months, the rate of bloodstream infections from these I.V. lines fell by two-thirds. The average I.C.U. cut its infection rate from 4 percent to zero. Over 18 months, the program saved more than 1,500 lives and nearly $200 million. [Link]

p>Other checklists have had similar effects, yet the use of such checklists is restricted to a small number of hospitals (and even then on a limited basis) rather than being routine and widespread.

p>The fact that a simple codification of existing practices could save so much makes me heavily discount my doctor friends when they tell me that “they’re doing all they can.” The checklists didn’t reduce the load on doctors, nor did it change their incentive systems, it simply held them accountable for the things they said they were already doing, although they clearly were not. Honestly, I can’t see how doctors can, in good conscience, oppose such changes.

99 thoughts on “What’s wrong with medicine”