It’s difficult for me to wake up once I hibernate for this long in our North Dakota Bunker, but for few things, like good music, I’ll tend to get out of my bunk for awhile. The thing that woke me up this time was the familiar sound of musical adventure in the form of bhajans (Devotional Songs).

p>I disliked bhajans growing up. I don’t know if it was the monotonous/repetitive tone of the vocals or my inability to understand the words or meanings of the songs. I was able to avoid bhajans from the time I left home for college until 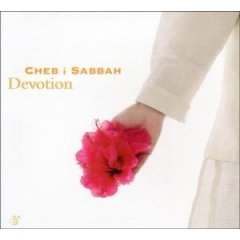 a trip to India (I know, in India, how clichÃ©?), four years ago, when the songs just seemed to click as a natural soundtrack to my travels. I started to appreciate the songs more. Maybe it was the place and time, or maybe I was able to contextualize the songs more, but I think I was finally able to grasp the intent of the song, of its purpose as a tool for Bhakti (Devotion).

p>So it was with much excitement when I saw the most recent musical release from one of my favorite global music pioneers, San Francisco based producer/DJ Cheb I Sabbah, entitled Devotion. This album, his seventh on six degrees records, is his fourth album focused on religious music from India — the first three, also available on Six Degrees Records are Shri Durga (1999), Maha Maya: Shri Durga Remixed (2000), and Krishna Lila (2002)-and while mostly similar in content, Devotion features music from three religious traditions found on the Indian Subcontinent, Hinduism, Sikhism, and Sufi Islam.

p>It’s important to note that Cheb i Sabbah’s work is not a “remix” album, of bhajans simply reworked electronically. The eight songs on Devotion are entirely organic creations of Cheb and various artists, including Master Saleem, classical songstress Shubha Mudgal, and the bhajan maestro Anup Jalota. The album opens strong with Jai Bhavani (Praise to Durga) with vocals by Jalota, in a typical “call and response” structured bhajan that builds slowly into a frenetic ending. Other highlight tracks include Morey Pya Bassey, featuring an inspiring Mudgal vocal, and Qalanderi, featuring the vocals of Riffat Sultana, and reinvented by Cheb I Sabbah to create a from of contemporary qawwali. (Click here for a free download of Qalanderi, courtesy of Six Degreees).

p>Cheb is in in typical form on Devotion, intricately weaving modern sounds with ancient vocals, without losing the music’s underlying intent, Devotion. His production, is as always, impeccable. I should be clear, the songs on Devotion are slower than those on his other albums, and unlike Shri Durga , Maha Maya, or Krishna Lila, I can’t picture hearing any of these tunes on the dancefloor, outside of Qalanderi. As Anna mentioned last week, Mutineers in DC will have a chance to find out what songs Cheb i Sabbah plays at one of his shows when he takes the stage at the famed DC venue, Bohemian Caverns. Joining him for the show will be one of my favorite turtablists Janaka Selekta, V:shal Kanwar, DJ Darko, and Julez. Bohemian Caverns is located at 2001 Eleventh Street N.W. Washington, D.C. Hope to see you there.

13 thoughts on “Sounds of Devotion”