The current online edition of Foreign Affairs contains a detailed essay written by each of this year’s U.S. presidential candidates (some going back to last summer). The only three essays that still matter are those penned by John McCain, Hillary Clinton, and Barack Obama. Naturally, the one South Asian nation they all mention is Afghanistan. What I wanted to do was highlight their thoughts on India and Pakistan and then end this post with the latest developments in Pakistan, which will play a pivotal role in how each of these candidates would be able to actually implement their stated policy (note: I’ve recently learned that quite a bit of the blogosphere anxiously waits for this ignorant American to blog about Pakistan again on SM).

First up is John McCain, the Republican nominee:

Success in Afghanistan is critical to stopping al Qaeda, but success in neighboring Pakistan is just as vital. We must continue to work with President Pervez Musharraf to dismantle the cells and camps that the Taliban and al Qaeda maintain in his country. These groups still have sanctuaries there, and the “Talibanization” of Pakistani society is advancing. The United States must help Pakistan resist the forces of extremism by making a long-term commitment to the country. This would mean enhancing Pakistan’s ability to act against insurgent safe havens and bring children into schools and out of extremist madrasahs and supporting Pakistani moderates. [Link]

p>Well, it seems that events on the ground have already upstaged McCain’s foreign policy. We won’t have Musharraf to kick around much longer (more about that at the end of this post). I would like to know more about what he means by “long term commitment.” That does sound like a good idea, although historically out-of-line with how we operate. America usually does not make long term commitments unless it has a stable leadership to work with that believes in (or a leadership that has been installed by us and coerced to believe in) our goals. As for India, this is all McCain has to say:

As president, I will seek to institutionalize the new quadrilateral security partnership among the major Asia-Pacific democracies: Australia, India, Japan, and the United States. [Link]

p>Next up is Hillary Clinton, one of the two remaining Democratic candidates:

Terrorists are increasingly finding safe havens in the Federally Administered Tribal Areas of Pakistan. Redoubling our efforts with Pakistan would not only help root out terrorist elements there; it would also signal to our NATO partners that the war in Afghanistan and the broader fight against extremism in South Asia are battles that we can and must win. Yet we cannot succeed unless we design a strategy that treats the entire region as an interconnected whole, where crises overlap with one another and the danger of a chain reaction of disasters is real. [Link]

p>Clinton, like McCain, believes that the U.S. has a vested interest in rooting out the terrorists in the tribal areas of Pakistan. The words she uses are different though. She uses “root out” and “battles we must win,” and sees the entire region as an interconnected crisis. This, to my ears is subtly more hawkish in wording than McCain’s policy of working with the Pakistani government. However, I believe they are essentially saying the same thing and I am not clever enough to figure out, based on just these words, how either of these two differ in policy from President Bush. About India, Clinton writes the following:

In Asia, India has a special significance both as an emerging power and as the world’s most populous democracy. As co-chair of the Senate India Caucus, I recognize the tremendous opportunity presented by India’s rise and the need to give the country an augmented voice in regional and international institutions, such as the UN. We must find additional ways for Australia, India, Japan, and the United States to cooperate on issues of mutual concern, including combating terrorism, cooperating on global climate control, protecting global energy supplies, and deepening global economic development. [Link]

p>Of the essays I read, she seems to spend the most time singling out India, which goes quite a ways in explaining why first generation Indian Americans especially support her candidacy.

p>Finally we have Barack Obama, the Democratic frontrunner:

We must refocus our efforts on Afghanistan and Pakistan — the central front in our war against al Qaeda — so that we are confronting terrorists where their roots run deepest. Success in Afghanistan is still possible, but only if we act quickly, judiciously, and decisively. We should pursue an integrated strategy that reinforces our troops in Afghanistan and works to remove the limitations placed by some NATO allies on their forces. Our strategy must also include sustained diplomacy to isolate the Taliban and more effective development programs that target aid to areas where the Taliban are making inroads.

I will join with our allies in insisting — not simply requesting — that Pakistan crack down on the Taliban, pursue Osama bin Laden and his lieutenants, and end its relationship with all terrorist groups. At the same time, I will encourage dialogue between Pakistan and India to work toward resolving their dispute over Kashmir and between Afghanistan and Pakistan to resolve their historic differences and develop the Pashtun border region. If Pakistan can look toward the east with greater confidence, it will be less likely to believe that its interests are best advanced through cooperation with the Taliban. [Link]

p>If someone interprets this differently, by all means I’d like to hear it, but this clearly sounds like the most hawkish and interventionist of all three essays, more so than even Bush’s policy. Of course, we already knew a little about Obama’s position on Pakistan before this essay. We also know that solely working with the government of Pakistan has never been a viable option, even with Musharraf. The unspoken reality of the situation is that our SEAL Teams and Delta Force commandos already go in to Pakistan and take care of business when they need to without permission. Giving Musharraf the credit for some of the ass-kicking just provides political cover (some would argue necessary cover) for both sides. What Obama is saying is “we don’t really care about providing political cover any more.” He wants to be more open about the fact that we will take care of business ourselves if Pakistan can’t. I actually kind of dig the openness and the “anti-Realpolitik” of his stance. Of course, following such a policy would mean admitting that you have no respect for the government of Pakistan. What is even more interesting than his Pakistan stance (because I believe all three candidates would pretty much do the same thing regardless of how they articulate it) is his comment about Kashmir. India has historically rejected third party mediation over Kashmir. The above policy seems to imply that the tribal regions along the Afghanistan/Pakistan border cannot be secured until Pakistan can relax a bit about its Indian border. Obama wants to “encourage” greater dialog about Kashmir, whatever that means.

p>Now for the other side of the equation. Who exactly will we be dealing with in Pakistan? Newsweek thinks it knows: 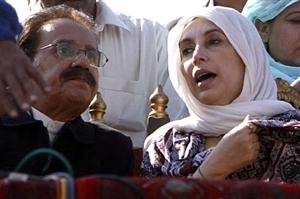 As the victors of Monday’s Pakistani elections continued to discuss who would lead their coalition in parliament, party insiders tell NEWSWEEK that the choice will most likely be veteran politician Makhdoom Amin Fahim. “It’s almost a done deal,” says an official from the Pakistan People’s Party who declined to be named because of the sensitivity of the information. The PPP, led by former prime minister Benazir Bhutto until her assassination in late December, won the most seats in the national assembly and thus has the prerogative to name the premier. Another former prime minister, Nawaz Sharif, whose party ran second, has agreed to support the choice.

Fahim, 68, almost became prime minister in 2002. Only his loyalty to Bhutto kept him from running the government. Back then Pakistani President Pervez Musharraf was scrambling to find coalition partners to bolster his own jerry-built party. He offered the top job to Fahim, who then as now was vice chairman of the PPP, but only under the condition that Fahim would not take direction from Bhutto, who was in exile. Fahim flatly refused. During her nine long years abroad, Bhutto knew she could rely on her fellow landowner from southern Sindh Province to be a trusted adviser and executor of her plans on the ground. Her widower, Asif Ali Zardari, who is now the PPP’s co-chairman, is counting on the same fidelity. [Link]

p>Fahim is described as someone who is as close to uncorruptable as you can get among Pakistan’s politicians (he actually sounds like an ok guy based solely on the article). He is also apparently viewed by America as a good potential partner. However, as noted in the article he was an extremely loyal servant to (the corrupt) Bhutto, and by extension her widower Zardari, who considers Fahim to be an ideal seat warmer. As for Zardari…

Nicknamed “Mr. Ten Percent” for the alleged kickbacks he received while Bhutto was in power, he served eight years in jail on corruption charges. (He denies the charges and has not been convicted.) He did not run for the assembly himself, preferring to remain abroad and look after the children while his wife campaigned and led the party. And at least for now he’s made it clear that he does not want to be prime minister. Party insiders say he realizes he could be too divisive a figure. But he can rest assured that Fahim will follow the party line that Zardari will largely lay down. [Link]

I know that a lot of Indians (based on some blogs I’ve read) think Prime Minister Manmohan Singh is beholden to the Gandhi family (especially Sonia). I don’t pay attention to Indian politics so I don’t have an opinion one way or the other. If there is any truth to it you might be seeing something similar in neighboring Pakistan now: an elite family ruling through a loyal and clean “remote-controlled” figurehead. Regardless, Pakistan seems likely to be ruled by a coalition of parties with diverging interests cobbled together (I say probably only because we know the military’s historical tendency to get involved with the “ruling” part). This will result in a weaker central government, one that will be more difficult to engage in Realpolitik with. The U.S. might just have to be more openly interventionist to meet its anti-terror goals, just like Obama seems to imply.