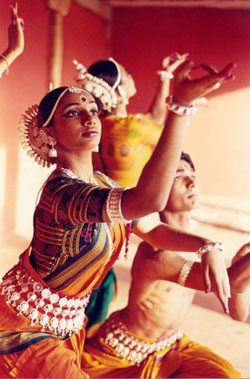 As somewhat of a Bharatanatyam supremacist, I often fail to appreciate the grace, economy of movement and a whole host of other subtleties that dancers of Manipuri, Mohiniattam, Odissi, Kathak, Kathakali and Kuchipudi display in such abundance. It’s also been far too long since I’ve seen a live dance performance. Well, the wait for dance-starved patrons/critics/dancers is over (at least in my neck of the woods.) The very renowned Nrityagram dance ensemble is currently touring the US.

The troupe recently performed at the Joyce Theater in New York (encores performances to follow), which earned yet another mildly positive yet utterly clueless review from the Grey Lady (which I will dissect later), and will continue on to the following locations: Feb 19-24, 2008 – The Joyce Theater , NYC

Apr 13, 2008: Stony Brook University , NYNrityagram is fairly unique as it’s the only school of dance (and so much more–beyond the scope of this post)that fairly strictly adheres to the ‘gurukulam’ format year round–students living in a preferably forested retreat with their guru; eating, sleeping and breathing their chosen discipline(s). It’s a very intense and effective teaching method for anything that requires a great deal of ‘muscle memory’ and spatial awareness. According to my anecdotal experience, even a few weeks of said Gurukulam-style training will raise anyone’s standard by a noticeable amount in only a few weeks.

I will be attending the performance at the University of Richmond’s Modlin Center on March 5th (not the 4th as indicated previously), from 7:30 till 9:30 (perhaps dressed in my Fab India best, if my mother succeeds in persuading me to dress like a cut-rate SRK–otherwise, look for the surly brown fellow with an uneven goatee)

contact details for tickets (and they are not cheap) are below:

18 thoughts on “Nrityagram: Hoping to Swoon at Such Stylings [UPDATE]”