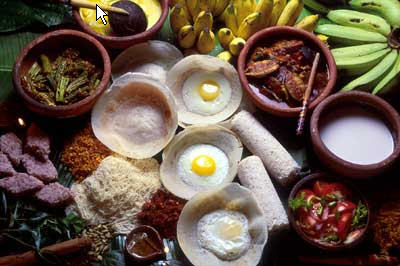 First off, a belated thanks to the Mutiny for letting me stay a month longer. Iâ€™m excited to be here, and even more excited that my topics now know no bounds. Brace yourselves. Huddle in the bunker.

You all know I love to write about food. And I love Sri Lanka. So what would make me sadder than anything? (Subtract conflict in Sri Lanka from consideration.) This piece about a Sri Lankan restaurant, from the Village Voice.

My friend K sent me this. (Thanks, K!) Thereâ€™s so much wrong with it that I hardly know where to begin. But what struck me most was something Iâ€™ve been seeing more and more in coverage of Sri Lanka: gratuitous inclusion or overemphasis on religion. Thereâ€™s enough carnage in Sri Lanka that I suppose people feel compelled to cover or mention the country. At the same time, they feel that they ought to smush news or writing about it into the Religion v. Religion WWE format currently favored by those discussing 9/11 and its aftermath. Sietsemaâ€™s lede:

If it weren’t for almost perpetual civil war, Sri Lanka would be a model of ethnic and religious diversity. Four of the world’s chief faithsâ€”Islam, Buddhism, Hinduism, and Christianityâ€”live side-by-side on the teardrop-shaped island once known as Ceylon.

Letâ€™s look at that again:

If it weren’t for almost perpetual civil war, Sri Lanka would be a model of ethnic and religious diversity.

So why start like that? And then the whole story is suffused with religious and exoticizing language.

Not long ago, getting good Sri Lankan food required a pilgrimage, too. Staten Island’s Victory Boulevard hosts several small cafÃ©s anchored by a mosque, and there’s a slightly more ambitious Sri Lankan eatery in a remote Hindu neighborhood in Flushing. But now a full-blown Sri Lankan restaurant has appeared near Gramercy Park, like a sign from the deity (or deities).

Nirvana’s best main courses are similarly anchored by an exotic starch. Pittu arrives like an encoded message from outer spaceâ€”a perfect white cylinder compacted of beaten rice and shredded coconut, which begins to crumble and flake as it lands on your table.â€¦ Other strange and singular Sri Lankan starchesâ€¦

First of all, pittu is apparently FROM SPACE. Second: Call the alliteration police! Nayagan, can you deduct pittu-points for this?

Now, this randomly religious restaurant review would be perhaps not such a big deal if it were not part of a larger pattern Iâ€™ve been observing. Coverage of Sri Lanka all too often gets skewed because it does not fit in the box of Religion v. Religion. Sietsemaâ€™s review mentions the word â€œethnicâ€ once, and the word â€œSinhaleseâ€ once. While there is certainly a religious element to the conflict, it is hardly the only or even the dominant one.

Iâ€™m not in favor of deepening the chasms that exist in discussion of Sri Lanka, but when bringing that discussion to new participants, Iâ€™d like to see it reflected more accurately.

The Christian Science Monitor on Muslims in Sri Lanka. Asking if theyâ€™re â€œripe for fundamentalismâ€ is not any better just because the headlineâ€”and at least one subheadâ€”ends in a question mark. This is not at all the story in this situation: the story is that thereâ€™s a huge population of victimized, displaced, largely ignored Muslims.

Dalrympleâ€™s passing reference in the NYT to the “Sri Lankan Hindu extremists” who killed Rajiv Gandhi. The LTTE was responsible for the death of Rajiv Gandhi, but the organization is secular, and has Christian and Hindu members. Indeed, the Christian Science Monitor story indicates that itâ€™s had Muslim members! But this does not fit into the commonly understood framework of religiously driven terrorism. (Check out Walter Laqueur for more on this.) And credit to Ramesh Rao, who has written about this elsewhere (although I certainly do not agree with everything he writes!)

This, sadly, seems to me the most accurate take.

Now, the question is, what should people be doing about it? It would be super to have a productive discussion about it. But what conditions must be in place for that to happen?