The Democratic National Committee, a group consisting of party officials who guide the Democratic Party and are currently led by Howard Dean, have just selected three desi women and one man to positions within the party in preparation for the convention in Denver later this year. SM is determined to be on hand at said convention to hopefully see these new committee members in action, and to witness how/if South Asian Americans are making strides by integrating into all levels of political participation (including smoky back-room-type politics).

Sunita Leeds, co-chair of the Washington, D.C.-based education-oriented Enfranchisement Foundation, was named one of the three co-chairs of the rules committee, which proposes convention rules, adopts an agenda and makes recommendations for permanent convention officers.

Of course, all of these new members will have their personal favorite among the candidates. For example, despite the fact that Smita Shah is a former Bill Clinton appointee, she is backing Obama in this race:

Shah, who will be married in February, was a delegate to the Democratic national conventions in 1996 and 2004 and on the rules committee in the 2000 and 2004 conventions.

She said that the Indian American community has changed dramatically since 1996, when “there were just seven people of Indian origin as delegates.” There were about 19-21 in 2004 and many more are expected this August.

A former appointee to President Bill Clinton’s Millennium Council to Save America’s Treasures, Shah is supporting Barack Obama for president.

“I have great respect for them (the Clintons), but I have been a supporter of Barack Obama and they have been gracious and understanding to me. They know I have to support my guy…” [Link]

Here is a bit of background on each of the new faces of the DNC:

Sunita Gupta Leeds, with her husband Dan Leeds, has been involved in Democratic politics for years. A software developer by training, she is now deeply involved with progressive non-profit causes particularly focused on education, is on three advisory boards related to education, and Co-Chairs The Enfranchisement Foundation, which funds charities that act as catalysts in breaking the cycle of poverty and ignorance, and charities that specialize in women’s issues. As Chair of the Council’s Advisory Board, Sunita will coordinate a network of Indian-American activists, community leaders, elected officials, and celebrities to support the fundraising and outreach work of the Council. [Link] 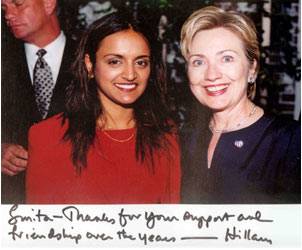 p>Abdul Malik Mujahid, is the President and Director of Sound Vision Foundation Inc. He is an Imam in the Chicago area. A graduate of Darul Uloom Shah Waliullah in Islamic Studies and the University of Chicago in Political Science, he has learned television production as director and producer at the Chicago Access Corporation. He is the producer of Sound Vision’s programs. He was also responsible for the concept and design of Al-Qari, the leading Quran learning multimedia software. Mujahid has served as the National Coordinator of Bosnia Task Force, USA. It was in this capacity that he initiated the formation of the Islamic Shura Council of North America. He also serves as National Coordinator of Kosova Task Force, USA, an alliance of 10 national organizations of Muslims in America. Mr. Mujahid also serves at the executive committee of the Council for a World Parliament of World Religions. [Link]

With regard to these new appointments Howard Dean was quoted as saying:

Dean, in a statement about the inclusiveness of the selection process, added, “These outstanding leaders reflect the great strength, diversity and energy of the Democratic Party, and I’m confident their efforts will ensure our convention in Denver is reflective of our shared values and our nominee’s vision for America…” [Link]