Greetings Mutineers! I am Nayagan and I am guest-blogging here to fight the good fight for pittu, sodhi and the thosai which embraces us all in it’s fermented glory. 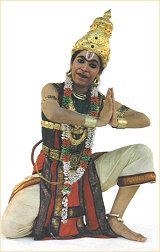 Listen up desi parents: Bina Menon, a classical dance teacher from West Orange NY, has the magical cure to all your ‘heritage preserving’ needs. Indeed, according to the New York Times, a turn in one of her stage productions (portraying an animal of the forest) will do wonders for lifting the Vestern pop-culture cloud which descended over your child’s eyes as soon as he/she exited the womb.

Yes, I know, the reporter attributed the sentiment to Menon’s students, but what exactly could these young ‘uns have known about a heritage which was supposedly out of their grasp? Could this deep knowledge be imparted by scratching one’s arm-pit repeatedly? Or perhaps by miming the grooming ritual so fancied by wild-life photographers? Whatever the standard, this reporter unwittingly added fuel to the “All Things Come From India” fire by attributing an honorific desis know all too well

to the Hindi crowd:

employing a Hindi term of endearment all her fellow dancers used for Ms. Menon

Okay, to be charitable to the reporter, and without sounding the Lemurian call to arms, perhaps this was really all about the dance. The one student who went on record, seems to confirm this:

â€œMy parents brought me into dance when I was 5, and at first I wasnâ€™t that into it,â€ said Teena Ammakuzhiyil, a lithe 20-year-old from Union who will play the wise monkey in â€œRamayanam,â€ a production that 25 senior-level dancers from Ms. Menonâ€™s Kalashri School will present on Jan. 27 at the Mayo Center for the Performing Arts in Morristown. â€œBut it brought me back to my roots, dancing with Bina-Auntie,â€

But the ‘roots’ return and the question bears asking, now that she has ‘found’ her roots, what’s left? Branching out into choreography? Founding her very own dance school? Perhaps she had better think twice:

The Kalashri School employs no other teachers because, as Ms. Menon says: â€œI havenâ€™t seen anyone who can teach as well as I can. And I really want my students to be good at what theyâ€™re doing.

A display of bravado (apparently all the other teachers toiling away at instructing recalcitrant students better hang ‘em up) tempered by weak equivocation–sounds like the ‘heritage’ is being taught by example. Turning aside from the arrogance, I wondered:

The article continues with a few references to platitudes we’re familiar with, “fosters community,” “it’s so much more than dance,” and “Indian Dance feels more comfortable than…” These are the buzz-words, the talking points that classical dance instructors often use to describe and justify what is usually just another extracurricular activity for application-filling, college-going, high-school students. What does it mean to you?

176 thoughts on “Portraying Monkeys Is Paramount in Preserving Our Culture?”