The last two days I have been performing back-breaking, grueling, utterly soul crushing labor…in my own house (well, my parents house). Have you guys ever read a news article about some reclusive old guy who had a lifelong hoarding problem (a.k.a syllogomania) and when police finally entered the house they found a rotting, partially eaten corpse buried underneath a pile of junk that was formerly on one side of the only navigable lane through the house? Yes? Then now you know what my dad is like (known as “Yo Dad” to some who read SM). My dad left with my mom for India earlier this week so I flew home to help my brother clean out the house without any resistance. I wanted to solve this looming crisis before my dad made the local news in the “odd news” segment. Over the last two days we’ve been cleaning out stuff (mostly stored in the basement) that spans back 40 years! I won’t bore you with descriptions of 20-year-old used shower curtains or “Indian luggage bags” filled with spiders. I will take you straight to the good stuff. First, check out these two cricket bats. I remember they were purchased on a trip to India in 1982/3 in Ahmedabad (I was ~7). Notice anything shocking on one of them?

Can someone please explain this to me? Why would a child’s cricket bat say Hitler on it? I can understand why the one on the right has Sunil Gavaskar’s name…but Hitler?? As best as I can guess, the bat makers meant to spell “Hitter” but misspelled it as “Hitler.” Why did my parents even buy me this cricket bat? This could REALLY come back to tank my candidacy if I ever run for office. This is a closet skeleton right up there with GW Bush’s and Obama’s cocaine use.

Digging through more boxes, I found a pleasant surprise to offset the feeling of guilt that the cricket bat had left inside my soul. It was my mom’s British Colonial Passport! 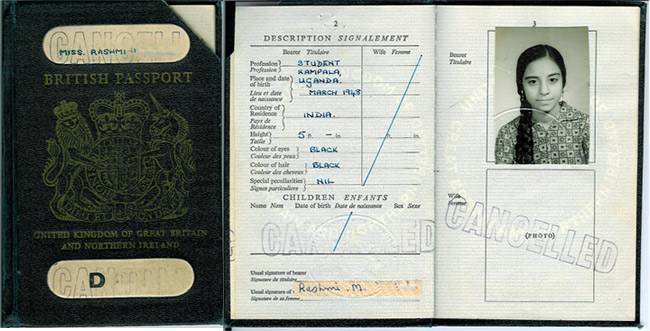 It had a bunch of 1971 visa stamps in it so I guess this is the passport my mom had in hand when she first entered the United States. I’m glad this precious document avoided ending up in the local dump. What a thing to show my kids some day.

Finally, I came across the one thing that can make any grown man fall to his knees and weep in remembrance of better times long since gone. Deep inside one box in the darkest corner of my basement was my teddy bear. It doesn’t matter to me that he is cross-eyed and mangy. His name is Bearhug. I named him that because that is what it said on his shirt. The name has long since been wiped off the shirt because of years of excessive hugging, but I still remember. Maybe I’m not a perfect man. Maybe I have a lot of flaws. Maybe I have a shadowy past (as evidenced by the cricket bat). But at least Bearhug loves me…still.

123 thoughts on “Skeletons in the basement”