Does stuff like this happen in real life? I thought these scenarios only played out in mid-summer B-movie comedies. From the Globe: 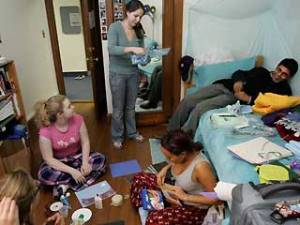 In the small, all-female world of Wellesley College, Mohammad Usman is famous in this way. He is literally a man among women – about 2,300 women. Usman, 19, is the only man attending Wellesley College this fall.

“A lot of people don’t know his name, really,” said Johanna Peace, a Wellesley junior and the editor-in-chief of the student newspaper, the Wellesley News. “They’re aware that there’s a boy on campus. And if they see him, they’ll say, ‘Oh – there’s the boy.’ “

The boy in question has been living in a dormitory on campus since September, showering in his private bathroom, and, perhaps predictably, becoming something of a folk hero among his male friends. [Link]

You got that? He’s becoming a folk hero. Desis have arrived when some of us begin to achieve folk hero status. So what is it about Usman that let the Wellesley administration let this rooster in the hen house? They actually have an exchange program. Some people want to be exchanged to a foreign school. Those people are stupid. Why go abroad to meet a cute Euro/Australian/South American girl for the summer when you could attend an all-girl school (with more favorable odds) right here?

He wanted to come for the educational experience. (And the women.) He was looking forward to living near Boston. (And lots of women.) To him, this was a chance of a lifetime.

“I thought it would be really fascinating to be the only male at an all-women’s college,” said Usman…

p>”I want to try new things, and the greatest part of a liberal-arts education is experiencing a wide variety of things. It’s important to me to get the most of my 50 Gs…” [Link]

Brother, we all want to try new things and get the most. I admire your educational ambitions. Once more we are the model minority. But…what do your parents think?

Usman, the fourth child of Pakistani immigrants who own a variety store in the Bronx, enrolled at Wellesley for the fall semester like everyone else. His parents, who dropped him off on campus, were surprised to see so many women, mostly because Usman had failed to tell them that Wellesley was a women’s college. [Link]

52 thoughts on “Like a kid in a candy store”